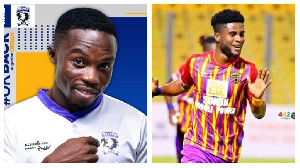 Ghana coach Otto Addo and his technical team have handed call up to two local players for the upcoming 2023 African Cup of Nations qualifiers and Kirin Cup in Japan.

The Black Stars will play Madagascar and Central African Republic in qualifiers next month before traveling to Japan for the four-nation tournament.

The pair have been outstanding in the ongoing Ghana Premier League campaign for their clubs and it is not surprising they have earned call up for the upcoming games.

Okrah, a former player of Kotoko has steered the Hunters to the MTN FA Cup final and are in contention for the Ghana Premier League title.

The enterprising winger has bagged 14 goals for Bechem United in the league.

Meanwhile, Afriyie Barnieh who has been the livewire for Hearts of Oak this season has bagged 10 goals in all competitions.