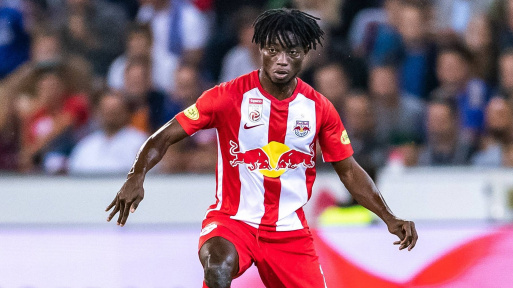 The young left back was sent on loan to Portuguese side, Vitória Guimarães.

However, upon his return to the club, Mensah is yet to be awarded a new contract.

Mensah joined the Red and Whites after a stellar campaign with West African Football Academy (WAFA) SC in the Ghana Premier League in 2015-16 before his move to the club in Austria in 2016 summer.

The youngster was quickly loaned out to FC Liefering for two seasons before moving Sturm Graz on loan in 2018.

He returned to Liefering in 2019 on loan again after failing to breakthrough the first team of the Austrian Típico Bundesliga champions.

In 2019-20 season, Mensah started the season with Salzburg but was loaned to Belgium team, Zulte Waregem for the rest of the campaign.

Mensah was loaned out again for the 2020-21 season after once again failing to impress manager Jesse Marsch.

The 22-year-old Ghanaian defender has not been offered a contract yet by the Red and Whites and is set to leave the club in the summer transfer window according to our close sources at the club in Austria.