The Executive Council of the Ghana Football Association has settled on names for four of our national teams. It would be recalled that Ghanaians were given the opportunity to suggest names for the remaining national teams.

The CHAN team which used to be Local Black Stars is now called Black Galaxies henceforth.

The national U-15 Girls team will be referred as Black Damsels while the Boys U-15 will be called Black Comets. The eFootball National team will be renamed.

The Council also took a decision to maintain the name of the national Beach Soccer team - Black Sharks.

These names will take immediate effect. 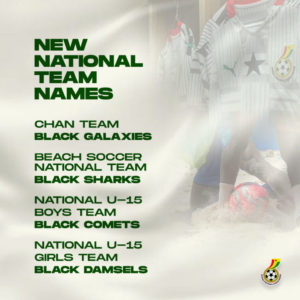