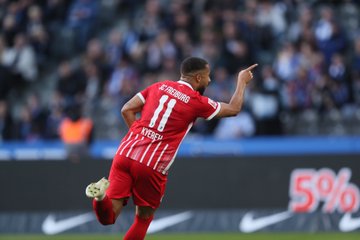 Ghana international Daniel-Kofi Kyereh has expressed his excitement after scoring yet again for Freiburg in their 2-2 draw with Hertha Berlin in the Bundesliga on Sunday.

The former St Pauli star started and lasted 76 minutes as he helped his side secure a vital point.

Kyereh scored to put Freiburg in the lead after 22 minutes but Hertha Berlin restored parity from the spot through Dodi Lukebakio in the 34th minute.

The goal against Hertha Berlin was the 26-year-old’s third in three consecutive matches for Freiburg having scored against Mainz 05 and Nantes in the last two games.

He got his first Bundesliga goal against Mainz 05 and proceeded to score against Nantes in the Europa League last week.

He replaced Suat Serdar in the 84th minute as his outfit shared the spoils.