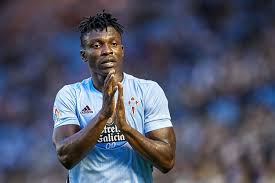 Ghanaian defender Joseph Aidoo has opened up on how Celta Vigo manager Fran Escribá helped him settle at the club easily.

The 23-year-old joined the La Liga side from Belgian champions KRC Genk on a five-year deal in the summer transfer window.

He has warmed his way into the starting line up of the team with some convincing performances this season but Aidoo opens up on how the coach played a major role in making him feel comfortable.

"Before the game, he approached me and told me that I didn't have to impress anyone, that I know the player time I am and that I should do what I know how to do. He also told me that he believes in me and that motivated me more to do my best," he told Joy online.

The highly-rated defender made his debut against Valencia as Celta Vigo sealed a 1-0 win at the Baladios.

He also featured in the 1-1 draw against Sevilla at the Ramon Sanchez Pizjuan.