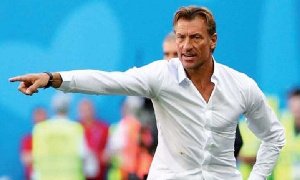 The Ghana FA terminated the contract of Charles Kwabla Akonnor together with his two deputies on Monday following Ghana’s uninspiring performances against Ethiopia and South Africa in the 2022 World Cup qualifiers.

The Ghana FA at its Executive Council meeting on Monday after the review and performance of the Black Stars in their last two games have changed direction to appoint a new coach.

A three-member committee led by Ghana FA Vice Chairman Mark Addo has been tasked to appoint a new coach in the next 72 hours.

Speaking about the proposed appointment of the Frenchman, Yaw Boateng Gyan insisted Ghana must afford Renard’s salary if the country is to achieve laurels.

“We should be able to hire Herve Renard who is earning $100,000 in Saudi Arabia if the speculations are true. If we cannot pay much money for any good or competent coach for the vacant coaching job then we are not prepared for laurels” he said.

The Frenchman has been widely suggested by many Ghanaians as the right man to coach the Black Stars following the sacking of coach Akonnor on Monday night.

Renard, who is the current coach of Saudi Arabia and a longtime admirer of the Black Stars, led Zambia and Ivory Coast to win the Africa Cup of Nations title.

Following the sacking of Akonnor, many Ghanaians are suggesting that the Frenchman should be appointed to help turn the fortunes of the Black Stars amid the 2022 World Cup qualifiers.

He is also seen as the man who can help Ghana win the Africa Cup of Nations title in Cameroon in four months' time just like he did with Zambia and Ivory Coast.