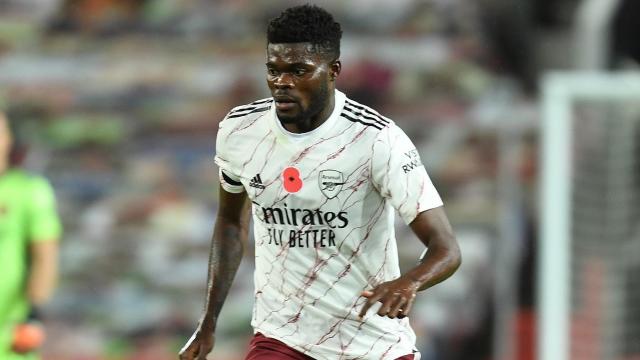 MANCHESTER, ENGLAND - NOVEMBER 01: Thomas Partey of Arsenal during the Premier League match between Manchester United and Arsenal at Old Trafford on November 01, 2020 in Manchester, England. Sporting stadiums around the UK remain under strict restrictions due to the Coronavirus Pandemic as Government social distancing laws prohibit fans inside venues resulting in games being played behind closed doors. (Photo by Stuart MacFarlane/Arsenal FC via Getty Images)

Ghanaian international, Thomas Partey is continuing his push to regain full fitness in order to have the chance to play for Arsenal again before the ongoing season ends.

The Black Stars talisman has been out with an injury since April when he sustained a thigh injury during his team’s game against Crystal Palace in the English Premier League.

After spending weeks on the sidelines, Thomas Partey has this month managed to start gym training.

This week, the former Atletico Madrid man has been able to commence individual training to the delight of fans of Arsenal.

While manager Mikel Arteta is unsure whether Thomas Partey will be able to feature for the team again this season, Thomas Partey is confident.

The midfield enforcer continues to push himself in training and is eager to play for the Gunners as soon as he is given the clear by the medical team of the club.

Later tonight, Thomas Partey will be watching from the sidelines when his Arsenal outfit takes on Tottenham Hotspurs in a crucial game for a spot in the top four of the league table.