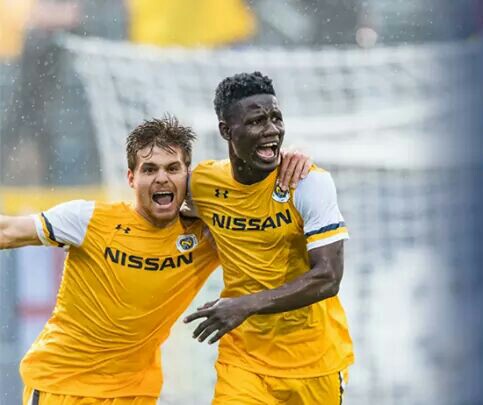 The 22-year-old put up an impressive performance as he helped his side seal all three points at Highmark Stadium.

Robbie Mertz opened the scoring for the home side in the 3rd minute from the spot and scored again in the 61st minute.

Ropapa Mensah made it 3-0 in the 65th minute before Anthony Velarde gave the Hounds their fourth goal in the 80th minute.

Dantouma Toure scored a consolation goal for New York in the third minute of second-half stoppage time as the game ended 4-1 in favour of the Pittsburgh Riverhounds.

The Ghanian youngster lasted for 78 minutes before being replaced by Danny Griffin.

Mensah has now scored two goals and provided two assists in six games for Pittsburgh Riverhounds so far this season.

The win lifts Pittsburgh Riverhounds to the summit of the Group F table.