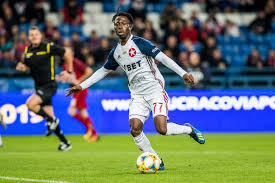 The 21-year-old eventually signed for Polish side Wisla Krakow but before that had trials at multiple clubs in Europe without success.

"Yes, as a 17-year-old I spent some time testing in Malaga, but I couldn't stay there longer because of what I told you a moment ago. I was not able to sign a contract with the club and the topic was simply lost," he told FutbolNews.pl.

"The regulations also stopped my transfer to Bologna - even though I was already eighteen. However, I couldn't stay any longer due to the reduction in the number of players from outside the European Union, despite the sincere intentions of the club to keep me."

"Then I was testing Vienna in Austria and I was surprised by… snow! I've never seen snow before and had to play there. I think that's why I didn't go there (laughs)."

"It was better in Hoffenheim, which brought me and two other Ghanaian guys for testing. Again, the rules have failed me. Later, however, came the U-20 African Nations Cup, after which I ended up in Wisła Kraków."

He has made five appearances for his current team this season.