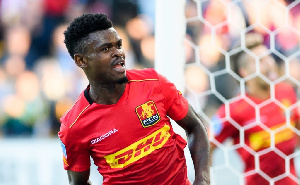 Donyoh suffered tenderness in the back muscle which ruled him out of the game on Thursday, a game his outfit beat Hapoel Afula 4-1.

The club decided not to play the Ghanaian in order to give him a rest for subsequent matches.

He is expected to return to action when his side face Hapoel Beer Sheva on Monday in the Israeli Premier League.