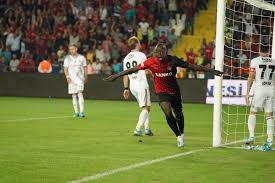 Ghana and Gazientep F.K midfielder Yusif Raman Chibsah has backed his teammates to bounce back from the defeat to Galatasaray and seal a win over Antalyspor.

Gaziantep F.K will face Antalyspor after the international break and will be hoping to return to winning ways after they lost 2-0 to Galatasaray at home.

"We are going very well as a team. The last match we played Galatasaray could not be very effective. I hope we make up for this away match Antalyaspor," says Chibsah.

The 26-year-old has been one of the standout players the Turkish Super Lig side, who are currently fifth on the table.

He has featured in 11 league games for Gaziantep F.K so far this season since joining them from Italian side Frosinone in the summer transfer window.

Chibsah has also made two appearances in the Turkish Cup, scoring two goals for the club.