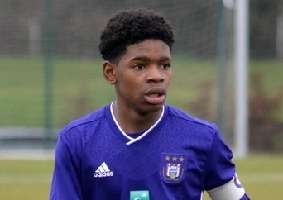 Promising Ghanaian youngster, Enock Agyei has been awarded the best player of in the YICC u-16 tournament after steering his Anderlecht side to lift the trophy at the end of the competition.

He was phenomenon for the Belgian Youth side and impressed throughout the preliminary stages to help them reach the final.

Having been billed to face the youth side of English club Wolverhampton, Enoch Agyei put up another outstanding performance that helped his club to emerge as 2-1 winners.

The Ghanaian youngster deservedly takes home the MVP accolade and is tipped for greatness in the near future.

He continues his development with Anderlecht after joining them from Verviers in 2015 at the age of 10.