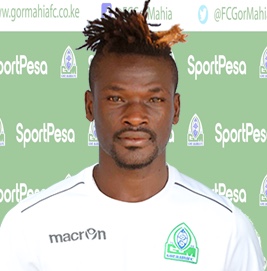 Ghanaian striker Francis Afriyie has set sights on scoring more goals for Gor Mahia as they lock horns with arch-rivals FC Leopards in the Kenyan Premier League on Sunday.

Afriyie has been one of the standout players for his side and is hoping to add more goals to his game.

Gor Mahia presently lead the table with  15 points with their arch rivals trailing them with just a point despite playing two games less.

Speaking ahead of the game, the Kenyan based striker has warned FC Leopards, stating that they should be weary of his treat at goal.

"Francis Afriyie has no pressure because the fans know what i’m capable of doing. The fans should expect goals from me. Gor Mahia will win on Sunday but trust me, I am the one going to score for the team", he told Bryt FM.

He has scored three goals in three games for Gor Mahia in the Kenyan Premier league.