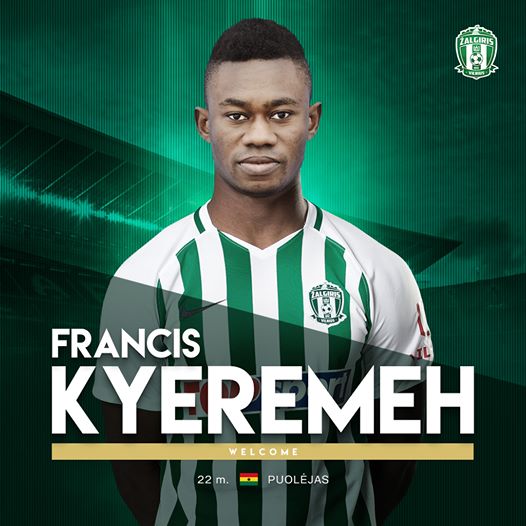 The 22-year-old penned a deal with the Green Whites after just seven months with Israeli outfit Hapoel Tel Aviv where he made eight league appearances and scored once for the side.

"There has been a lot of travel on visa issues lately. It all took a while so I'm a little tired. I think it will take a few weeks for me to get the optimal shape. I'm happy to be here. This is a great club. I'm ready for a new challenge and I'm looking forward to playing in Zalgiris, " he told  fkzalgiris.lt.

Kyeremeh added, "Before I came to Lithuania I watched a lot of different videos and what I saw left me impressed. I am happy to join Žalgiris. My good friend Matija Ljujić recommended me to come here, and I also spoke with Nemanja Ljubisavljevic."

"I have had a match with him and he also said that I would not hesitate. I knew Zalgiris club a long time ago, it is a team that trophies and plays in Europe. It would be fun to compete against Zalgiris in the UEFA Champions League in the future."