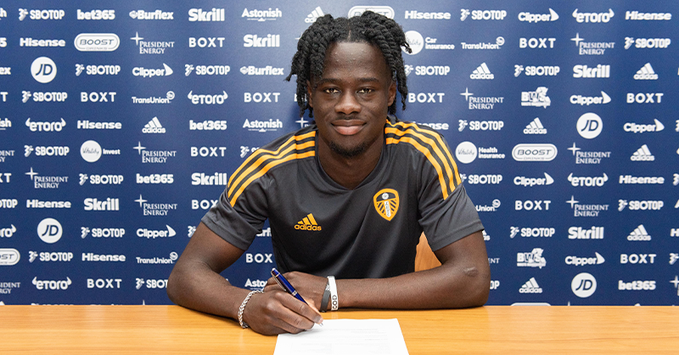 Ghanaian youngster Gyabi Darko has disclosed what Leeds United fans should expect from him this season after completing his switch from Manchester City.

The 18-year-old joins The Whites on a four year deal after successful negotiations and passing his medicals.

The youngster becomes the club’s fourth signing of the summer, following the arrivals of Brenden Aaronson, Rasmus Kristensen and Marc Roca.

Darko told LUTV: "I like to get on the ball." I like to drive with the ball and carry the ball, I am creative and I like to score goals as well, I can keep possession and play forward."

"Off the ball I am very aggressive and I can press, I work hard as well. I want to push and help as much as I can with the team, get into the squad and show what I am about."

The highly-rated forward moved to the Etihad Stadium after catching the eye for Millwall’s Academy back in 2018.

He went on to play a key role in helping Manchester City’s Under-18s win the Premier League North title in the 2020/21 campaign.

Gyabi has also won 12 caps for England at youth level, spread across call ups for the Under-15s, Under-16s and Under-18s.