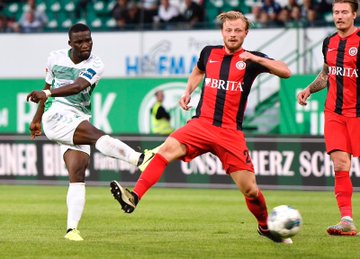 The 21-year-old lasted the entire duration of the game as the Cloverleaves picked up all three points in their matchday six at the Stadion am Laubenweg.

Manuel Shaffler gave the visitors the lead in the 46th minute before goals from Daniel Keita-Ruel and Julian Green sealed a hard-fought win for the home side.

"Great atmosphere at the office last night. Thank God for the victory and great fight from the team," the 22-year old posted after the game.

The on-loan Stuggart youngster has been an influential figure for Greuther Furth so far this season, featuring in four matches in the Bundesliga II.