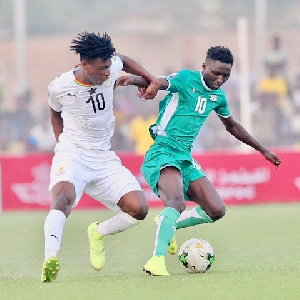 Ghana and FC Nordsjaelland midfielder Kudus Mohammed has expressed his excitement following inclusion in the Black Stars squad for the upcoming 2021 Africa Cup of Nations qualifiers against South Africa and São Tomé and Príncipe.

Mohammed has been included in coach Kwesi Appiah's 23-man squad for the double-header next month.

The 19-year-old has been one of the standout players for FC Nordsjaelland so far this season, scoring four goals in 10 appearances.

Ghana will host South Africa at the Cape Coast stadium on Thursday November 14 before travelling to Sao Tomé to play them four days later.

"I'm very happy to hear this. I'm looking very much forward to represent my county again," he said.

"My coach Flemming Pedersen told me today after training, and I just thought "wow". It's good news but I also believe it's just the beginning and now I need to work even harder.”

"I knew the national coach had been here in FCN to visit and that there was a chance this could happen. This is one of one of the biggest things that can happen, and it has come early. It's a good and if step for me but it's just the beginning."