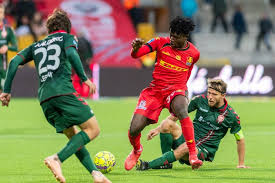 Ghanaian prodigy Kudus Mohammed scored again for FC Nordsjaelland as they drew 2-2 with Hobro IK in the Danish Super Liga on Sunday afternoon.

The 19-year-old put up an incredible performance as FC Nordsjaelland secured a vital away point at the DS Arena.

Mohammed bagged the equalizer for the Red and Yellow lads in the 35th minute after Emmanuel Sabbi had opened the scoring for Hobro IK in the 14th minute of the game.

His compatriot Ibrahim Sadiq came off the bench to make it 2-1 for the visitors before a late goal from Edgar Babayan ended the match in a 2-2 draw.

Due to his impressive performances in the Danish top-flight league, he has received a call-up to the senior national team of Ghana, the Black Stars for the 2021 Africa Cup of Nations qualifiers.

He has featured in 12 games and scored five goals for FC Nordsjaelland in all competitions so far this season.