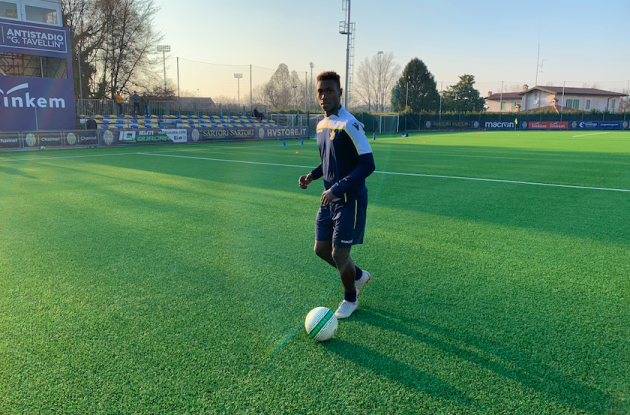 Meet 16-year-old sensation Philip Yeboah Ankrah, who scored 25 goals in 25 games for Hellas Verona’s U-17 side, and is one of Ghana's brightest young talents in world football.

Yebo, as he is known to his friends, is set to make his Serie A debut this season, but while he may be at an early stage of his development, he's setting his sights on a move to one of Europe's footballing giants in the future.

“In Italy, my preferred destination will be Juventus, but my greatest dream is to play for Manchester City,” he told Goal. “I love their style of football and I aspire to be like Sergio Aguero.

“In Serie A, I watch Cristiano Ronaldo a lot, but I love Aguero because he is the player I look up to. He is very strong and aggressive on the field.

"I also pay attention to other strikers too, like Harry Kane. I admire him a lot because of his strong desire to always get on the scoresheet.”

He describes his own game in similar terms, commenting that he is “very fast and physically strong,” and able to “hold up the ball very well if my team need to breathe.”

At 10, the Ghanaian teenager travelled to Europe with his father Twum Ankrah, who had realised his son’s footballing instincts at a very early age.

Ankrah was keen on nurturing Philip’s innate talent, and so enrolled him in the neighbourhood league in the vicinity of Borgo Virgilio, where he was then discovered by Alberto Saccuman, a member of the technical team at youth level for Hellas Verona, who subsequently invited him for a trial at the club.

“My family [has always been my main motivation]," he continued, "[as well as] the desire to become someone important in the future.

“I want to be an important person in life. Someone who has a positive influence on people to achieve their dreams and I think with my talent, football allows me to become that role model.”

He says his dream has always been to play football.

“When I came to Italy my immediate desire was to play football because that’s what I love and I used to play the sport with my friends in Ghana," the youngster added.

Philip started as a defender, but Saccuman converted him into a striker due to his pace, athleticism and height. At 16, Philip is already 5ft 11in (180cm), and he only turns 17 in September.

He relishes playing up front, especially given the attention and accolades that come with regularly finding the net, and he scored 25 goals, including four hat-tricks, for the U-17s last season.

“It feels great, obviously this has been my most productive season since joining the club as a kid,” he said. “In the previous season, I managed to score 12, which is not bad because I had a few injuries so this year has been great.

"I feel very good and I think I can go further.’’

Yeboah’s goals helped propelled the U-17s to the playoffs after a fifth-place finish in the youth league and has begun to earn media attention in regional and national publications.

He's been tied to a pre-contract deal until the year 2022, following the consent of his parents, a move made to ensure they secured the player’s services amid interest from bigger clubs.

“When I saw my name in the news it felt normal,” said Yeboah, who is taking it all in his stride. “It’s a good thing because you realize something about you is changing."

It's clear that Yeboah's relationship with his father has been key to both his journey to date and his current success.

“I love my father very much because he is the only one working to take care of the family," the startlet acknowledged. "It’s a huge responsibility for him because I have three other siblings together with my mum.  I want to secure a better future for my family. My mum always gives me advice on how to behave and become a good person.

“I played football in my youth, juggling from one club to another but I never had the opportunity to realise my dream,” Twum Ankrah told Goal, "but Philip is very talented and has a strong desire to play football. Growing up in Ghana he was always out there [playing] with his brother and friends.”

His older brother, Ahmed Awuah Ankrah, plays in midfield for Parma’s U-17 side. Growing up as kids in the town of Drobo, in the Brong Ahafo region in Ghana, Yeboah and his brother formed a team of young teens and named it Adinkra Stars, a sign of his inclinations as a young child.

He would be eligible to play for Italy at the international level, but he’s likely to be encouraged to represent the nation of his birth. Those pickup games organised by himself and his brother mean his football roots are in Ghana, even though he is developing as a professional in Italy.

“My Dad wants me to play for Ghana but I haven’t decided yet,” Yeboah says. “I hope to repeat the same level of performance next season. I plan to stay at Hellas Verona.

"I’m pretty confident that on the back of such a significant campaign. I will have the opportunity to graduate to the first team, but it all depends on me.”