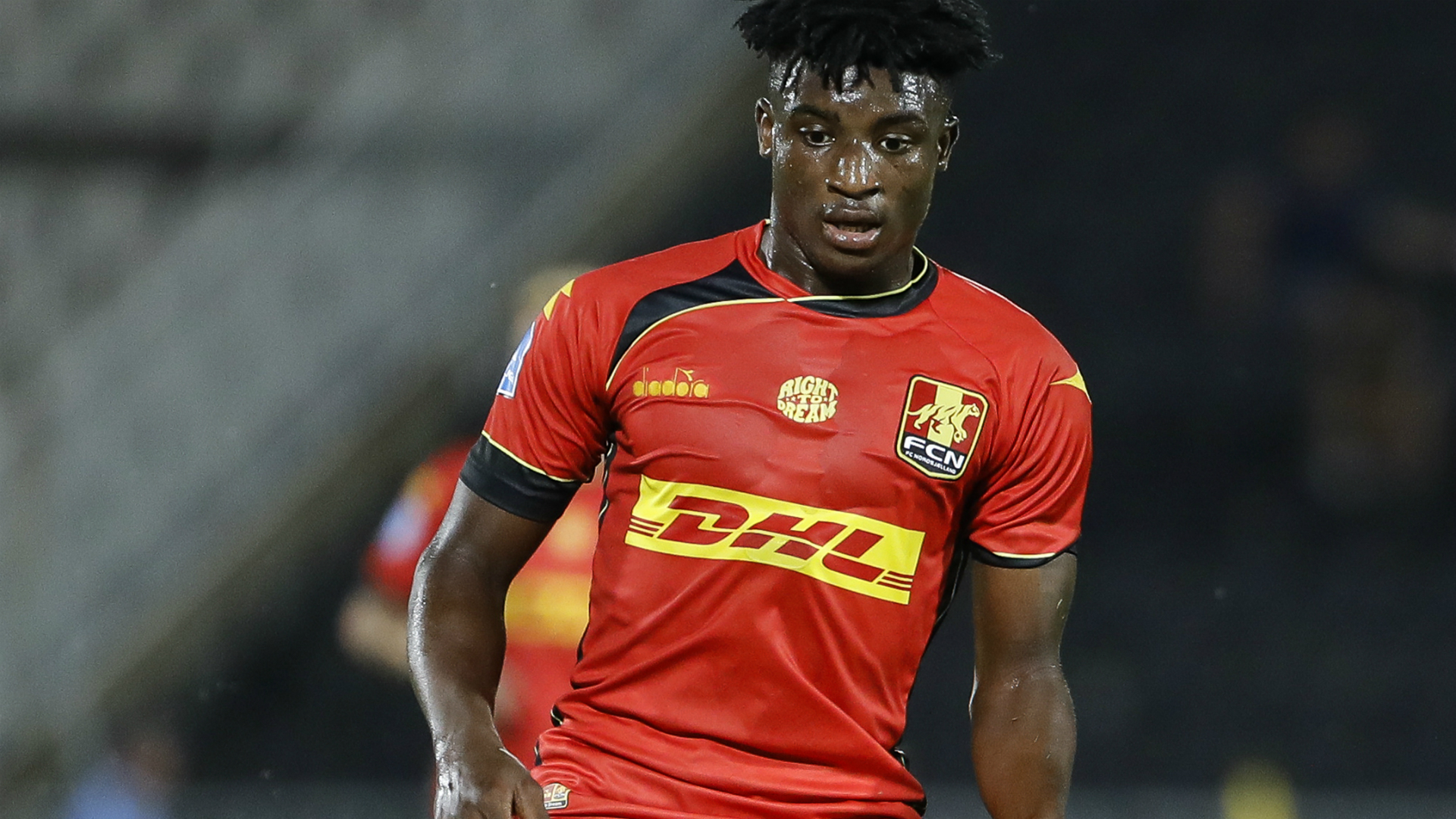 Kudus is a 19-year-old Ghanian international who plays for FC Nordsjælland in the Danish Superliga. They are currently 5th in the league.

Like many Nordsjælland players, Kudus came through the Right to Dream academy in Ghana who do exceptional work and are worth looking at.

He plays as a false 9 in a front three in Denmark and has impressed this season. He has been linked with Tottenham Hotspur, Sampdoria, and Everton and no doubt many of Europes’ top clubs are monitoring him.

The wingers play very narrow and make runs into the spaces that Kudus is able to create while the full-backs push high and provide width.

He is good at receiving between the lines and in deep areas, forcing the opposition defenders to make decisions and dragging them out of position. Above you can see an example where he drags a centre half out of position, leaving a large gap for the right winger to move into. He’s very involved in play, attempting 37 passes (all stats are per 90 minutes) with a 89.5% accuracy. He’s quite unpredictable and makes its difficult for defenders.

The Ghanian stands at 5’10” with a medium, athletic build but is well built with good muscle mass but could still fill out a bit. He isn’t the most aggressive but shows good strength to retain the ball. He’s great at evading pressure and protecting the ball, using great ball control and holding off defenders, making it hard to take the ball off him. He’s explosive with great agility and a low centre of gravity. He’s got an excellent burst of pace and good change of direction. His top overall speed is great but doesn’t use it that often. He does okay in the air, controls high balls well but struggles to compete with physical centre-halves.

His passing is good, picking his head up quickly and playing smooth passes to players in space when he can but knows when to go backwards. He plays a lot of layoffs with his hold up play and receiving between the lines, and shows good awareness to play first time passes to teammates with good weight. He isn’t a progressive passer, making just 2.7, but his play with his back to goal is good even if he isn’t a target man. He is good at spreading play, especially when he drops very deep and looks to feed the full-backs.

He has a very free role, the 4–3–3 can often look more like a 4-diamond-2 as he drops deep to get the ball. When the ball is wide Kudus will often support play from the half-space and will often drop very deep into midfield to receive the ball. His concentration could be better as his work rate to fight for positioning can be a bit mixed. Sometimes he’ll be constantly adjusting to open a passing lane to receive but sometimes won’t move enough and be ball watching a bit. He wants to get on the ball but can sometimes drop too much and be very close to his teammate whereas he’d be better off moving to create space for others and find space further up the pitch.

Although when receiving between the lines he could receive on the turn really well and be explosive, at times when he receives deeper in midfield he needs to be more aware of defenders and open up his body more. He was able to find spaces and carry to ball forward, driving at the defence, making 2.7 progressive runs which is excellent.

He’s very press resistant and has good ball retention with his ball control and physicality. He is intelligent in tight spaces with good feet and making quick decisions to get out of pressure or get passes through small gaps into players in space. He uses roulettes and turns to get out of pressure and comes away with the ball even when you wouldn’t expect at times. He is great at using feints and chops to get away from pressing players and create space for himself with a good change of direction. He has flair and is exciting to watch using skill passes and being able to drive at the defence.

Although his short passing game is good, he needs to work on his final product and ability in and around the box. He isn’t the most creative or progressive player but has decent end product and can feed balls into forward running wingers pretty well. He takes 2.9 shots but creates only 0.29 key passes. He only takes 3.1 touches in the box which could be higher. His expected goal contribution is 0.49 which is good, scoring 0.37 non-penalty goals this season in the league.

Despite a decent scoring rate, he lacks the instincts of a striker in the box and doesn’t threaten enough. He is good at scoring from the edge of the box and from cutbacks where he is the late runner, like a 10, but needs to develop the skills of high scoring strikers in terms of positioning, movement and finishing.

Out of possession, he was a bit mixed and inconsistent. Sometimes he’d press with high intensity but sometimes lacked intelligent movement, rushing the defender but not really troubling them and would sometimes be quick aggressive and leave a late hit or tackle. Overall though he presses well at times but needs to build some consistency with it and could become very dangerous with his pressing, especially with his pace and agility. At times he can sit off a bit and lack intensity but was sometime asked to mark the opposition 6.

He’s definitely a good prospect worth keeping an eye on for the future. As for areas to improve, he is very left-footed, could be more dangerous in the box, progress the ball more and lose the ball less. Sometimes he could dribble into a dead end and although his control is good his first touch could be heavy at times.

Looking at his stats, his pressing numbers stand out and could make him a strong target for a lot of sides. Liverpool may even be looking at him to see how he could replace Firmino in a few years.

It’s difficult to see where his future lies. He is only 19 and could develop into a dangerous striker, continue as a false 9 or play as a second striker in a front two. But he could also play as a 10 in the long term or be converted into a ball carrying 8 or a right inside forward. He’s versatile and will hopefully develop into a very effective player. He has a high ceiling and I’m excited to see where he ends up. He needs more time to develop in a league like Denmark, Belgium, Holland or the Championship. A jump to the Premier League now would be a lot, he might struggle with the intensity and wouldn’t be afforded the amount of space he enjoys so much in Denmark. But he could be a good buy for a good team who let him go out on loan to develop further.