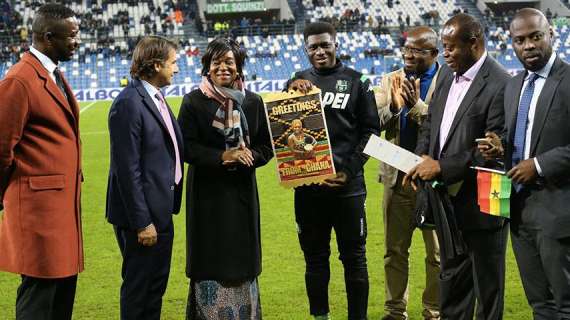 The 26-year-old was presented with a beautiful plaque by the ambassador before Sassuolo's game against Bologna on Sunday.

The award was in recognition of his humanitarian endeavors.

Mr. Jonathan R. Magnusen, Minister of Welfare and Chief Consular, was present at the Mapei Stadium together with over 200 members of the National Association of Ghanaian's at Reggio Emilia and of the Associations of the Mondinsieme Intercultural Foundation.

After the presentation of the award, Chief Executive Officer of Sassuolo Giovanni Carnevali took the opportunity to extend his relationship with the Ghanaian community in Italy.

"Sport, and in particular football, sees its richness in cultural differences and expressions and it was an honour, as Sassuolo Calcio, to have been able to welcome the Ambassador and friends of Ghana and other communities among the Neroverdi fans," the C.E.O is quoted as saying.