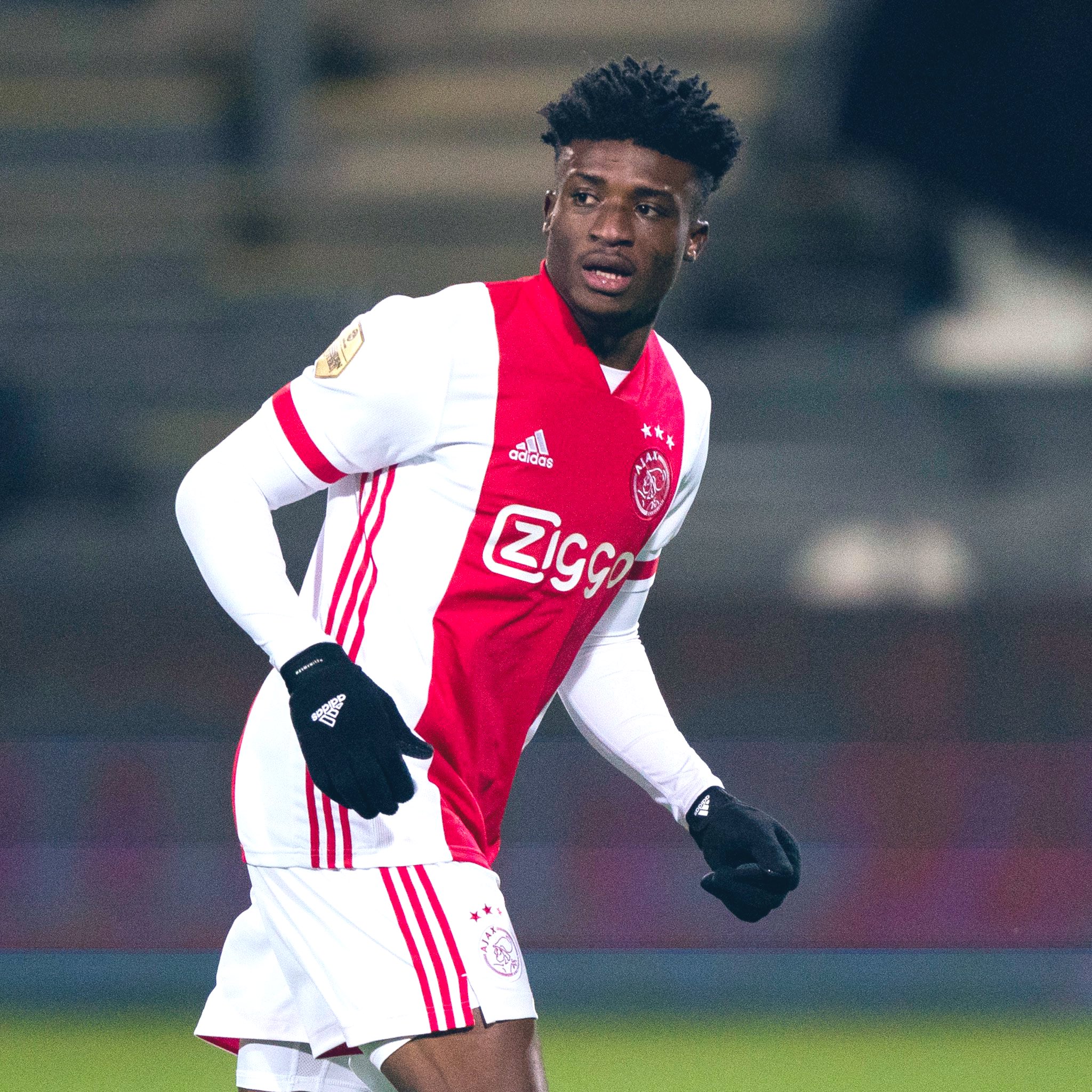 The west African powerhouse haven't won any major trophy for almost four decades on the continent and former VfL Wolfsburg captain Charles Akonnor has been tasked by the current leadership of the country's football governing body- (GFA) to try his possible best to conquer Africa at the 2022 Nations Cup tournament in Cameroon.

The last time Ghana won an AFCON title was in 1982. However, the country has come close to winning its fifth title on three occasions having lost three finals in 1992, 2010 and 2015 respectively.

In view of that, Sports journalist David Stevenson Manu, a Ghanaians abroad expert, has put together this piece, highlighting six potentials who could soon follow the footsteps in the likes of Michael Essien, Stephen Appiah, Derek Boateng, Sulley Muntari, John Paintsil in Europe.

Kamaldeen is arguably one of the best Ghanaian talents currently in Europe following his outstanding display in the Danish league for FC Nordjaelland.

An evident to the former Right to Dream Academy star's sparkling form this campaign is both English giants Manchester United and Liverpool interested in signing him this summer.

The Ghanaian's manager at Danish side FC Nordsjælland has confirmed as a host of European sides gear up for the race to land the teenager.

As previously reported by top English tabloids, a dozen of European clubs watched on as the 19-year-old scored his 10th goal of the season against Copenhagen, with United sending scout Tommy Nielsen to cast his eye over the winger.

Ajax sent their technical director, Marc Overmars, to Denmark to take a look at the £12m winger, with the Dutch giants having previously had a bid for the youngster turned down in January.

The 19-year old who has been named in Charles Akonnor's Black Stars squad for next month's two Fifa international friendlies against Morocco and Ivory Coast has bagged 10 goals in 29 matches for FC Nordjaelland this season. He has also provided 4 assists.

Kamaldeen certainly is a player Ghana would be hoping to see in the next few years competing with the best talents in the world to host the country's flag for sporting reasons.

Born in Ghana, Salisu started his senior career with the Spanish side, Valladolid, before making what has been described as a good move to the English Premier League to join Southampton this season. The promising left-footed centre-back made 12 Premier League appearances for Ralph Hasenhüttl's side.

He received his maiden Black Stars call-up in 2019 by then Ghana coach Kwasi Appiah but turned down the invitation over fitness concerns and has since not been invited by current manager Charles Akonnor.

“He is somebody who I have watched for some time now. We understand he is doing well but in his area of the position we have a lot of players that we are satisfied with,” Akonnor said during a press briefing when he named the Black Stars for next month's international friendlies against Morocco and Ivory Coast.

“We don’t have much of a problem in his position so we would look at him when he is ready”, he added.

The 22-year old defender, undeniably, has what it takes to become Ghana's next Eric Addo or John Mensah should he finally opt to represent the four-time African Champions.

Salisu would be hoping to excite fans in the Premiership next season with some brilliant performances and statistics to help him switch camp to any of the top clubs in Europe to accomplish his dream of tasting European football.

"The position thing is that Ramadan has now finished so these lads will now come back to a normal rhythm with sleeping at night and eating in the day – this will bring them back to 100% and goes for him, Ibra [Diallo] and Moussa [Djenepo].

"It’s important, I think. I was happy with his development this season so far and I always said that next season will be his, I think."

Born in Amsterdam to Ghanaian parents, Brian Brobbey has emerged as one of the top young talents in Europe after his impressive display helped giants Ajax Amsterdam to win the 2020/21 Dutch Eredivisie.

The 19-year old attacker who is the youngers if four brothers Kevin Luckassen, Derrick Luckassen and Samuel Brobbey who are all professional footballers, played 12 games for Ajax and scored three goals to his name after excelling at the youth team Jong Ajax.

The promising striker signed a contract through to 2025 back in March with German Bundesliga club RB Leipzig, but reports suggest he is now getting cold feet on the move after manager Julian Nagelsmann agreed to join Bayern Munich with Ajax exploring the option of re-signing Brian Brobbey back from the German side.

Brobbey's contract expires in June, and he decided against extending his time with Ajax in favour of joining Leipzig on a free transfer next season.

Brobbey, 19, has been at Ajax since the age of eight, coming through their academy system and broke into the first-team last season.

He is regarded as one of the best young strikers in Europe, and Ajax were keen for him to extend his stay at the Eredivisie champions.

Meanwhile, the Ghana Football Association has been in constant talks with the former Netherlands youth international to switch nationality to represent his motherland country at the senior national level.

Kudus was handed the No.20 jersey at the Eredivisie side.

The Ghanaian international quickly established himself in the Ajax team but painfully picked an injury three months later while playing in the UEFA Champions against Liverpool.

The Right to Dream Academy graduate on his debut in the elite European inter-club competition, the 20-year-old sustained an early injury after challenging Liverpool's Fabinho for the ball.

He tried to run off the injury but was visibly limping, unsurprisingly going down on the pitch moments later for treatment from the medical team.

The youngster spent almost seven months in the injury room and returned to help Ajax win the Dutch and Cup and the Eredivisie. He managed 17 games for Ajax and scored four times. He also provided three assists.

The former Everton target, already, has bagged two goals in his last five games for the Black Stars and surely, would play an integral role in next year's Afcon tournament in Cameroon and the Qatar 2022 World Cup qualifiers.

Sowah who joined Leicester City from the Ghanaian side Right to Dream in January 2018, has enjoyed several loan spells at OH Leuven.

In September last year, he signed a long-term contract with the English Premier League side as he hopes to earn a spot in their first team next season after an impressive spell in Belgium.

The pacy and skillful attacking midfielder has been handed his debut call-up to the senior national team of Ghana by CK Akonnor for Black Stars next month's international friendlies against Morocco and Ivory Coast.

Sowah has been tipped as one of the top young talents in Europe and is set to justify his incredible talent to global football fanatics in the coming years.

Khalid Abdul Mumin Suleman, commonly known as Abdul Mumin, is one of the young talents Ghana and football lovers for that matter are yearning to see play in any of the top five major leagues in Europe.

The 22-year old centre-back joined Vitória Guimarães last season when he rejected an offer to extend his stay in the Danish Superliga with FC Nordjaelland.

Despite being chased by Newcastle United and other top clubs in Europe, the Ghanaian defender opted to move to the Portuguese league where signed a four-year deal for Vitória Guimarães.

Having played 25 league games for Vitória Guimarães this term, Mumin has already started attracting interest from Tottenham, Newcastle United and other top clubs in Europe.

The calm-looking talented defender could make a move to England in the summer transfer should the Portuguese club decide to cash on him.

The former playing mate of youngsters Kamaldeen Suelemana and Mohammed Kudus has been named in the Ghana U23 squad for next month's international friendlies against Japan and South Korea.

Abdul Mumin, undoubtedly, with the right guidance would soon become one of African's top defenders in Europe.