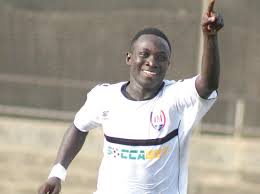 Niger international Victorien Adebayor rescued a point for Inter Allies as they were held to a 1-1 stalemate at home to WAFA SC in the Ghana Premier League on Sunday.

Adebayor's lone goal was enough to secure a vital point for the Accra-based side on match day five encounter.

Inter Allies made a start to the game as they forced goalkeeper Acquah into making a save in the 5th minute.

Just after the hour mark, the visitors took the lead through Eric Asamany who lobbed the ball over the goalkeeper from the left side of the box.

Just before the end of the first half, Adebayor dribbled past the defence and shot at goal, but his effort was saved by goalkeeper Acquah.

After the recess, Adebayor wasted an another opportunity when he shot wide from inside the box.

In the 86th minute, Adebayor hit a powerful shot that went past the goalkeeper for the equalizer.