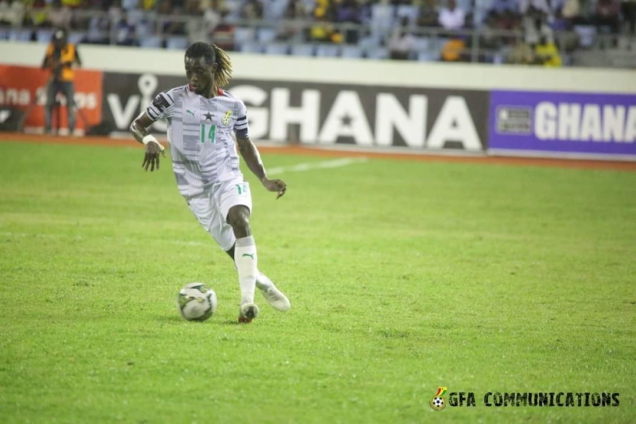 Sensational Gideon Mensah is living up to his name in the new-look Black Stars set-up. Slowly but surely, the 23-year-old defender is establishing himself as a missing piece in the jigsaw of the Black Stars defense.

Last Wednesday, Mensah displayed a 24-carat gold performance in Ghana’s 3-0 thrashing of Madagascar in their Africa Cup of Nations (AFCON) qualifier in Cape Coast to make the headlines. His ‘Cinderella story’ actually began in March when he was handed a great chance by Coach Otto Addo to prove himself back-to-back in the two-leg Qatar 2022 FIFA World Cup playoff against rivals Nigeria in Kumasi and Abuja respectively.

Stepping in as a substitute for injured left-back, Baba Abdul Rahman, the Red Bull Salzburg defender seized the moment to endear himself to the Black Stars technical team by neutralizing the threat of Super Eagles and Villareal dangerman, Samuel Chukwueze. He contributed immensely to Ghana’s fourth Mundial qualification following a barren draw in the first leg and a grueling 1-1 stalemate in the 60,000 capacity Moshood Abiola Stadium in Abuja on March 29, 2021.

As if destined to run his luck during the tenure of the new Black Stars technical team headed by former Ghanaian international, Otto Addo, Gideon was on hand to repeat that superlative form last Wednesday to set tongues wagging, while cementing his position in the team’s favorite 3-4-3 formation.

That brief success story, which is akin to his parallel defensive partner, ‘Professor Denis Odoi, has transformed him from a fringe player into a regular starter to the delight of his fans. According to the statistics, all the passes supplied by Mensah with his cultured left foot in the Madagascar game were inch-perfect, while his combination with his defensive partners - Daniel Amartey and Odoi - was flawless.

Perhaps, the rise and rise of the rasta-haired wing-back at the national team level might influence the decision of relegated French Ligue 1 side, Bordeaux, to sign him on permanently after his one-year loan spell ended at the just-ended season. Mensah joined Bordeaux on loan from Red Bull Salzburg with the option of a permanent deal, but due to their relegation setback, Bordeaux are now torn between exercising the option to extend the deal or release the Ghanaian back to the Austrian side.

He has been with Salzburg since 2019 after joining them from FC Liefering in Austria. However, he has spent the last three seasons on loan. Mensah first went on a brief loan stint with Sturm Graz in Austria in 2019 and Belgian side, Zulte Waregem (2019/20), then moved to Vitória de Guimarães in Portugal (2020/21), before joining Bordeaux in France.

On their way to finishing bottom in the 2021/22 season, Bordeaux featured the Ghanaian youngster in 23 matches which saw him contributing two assists. Considering his splendid form, Mensah, who is under contract with Salzburg till 2024, could again be loaned out to another top-flight club in Europe to keep him active ahead of the 2022 FIFA World Cup in November-December in case Bordeaux fail to re-engage him.

Mensah’s blossoming career began in the 2015/2016 season with West Africa Football Academy (WAFA), one of the leading exporters of talents in Ghana. He was born in Accra on July 18, 1998, and has an average height of 1.78m.

As he focuses on his maiden FIFA World Cup appearance, Mensah fancies Ghana’s chances in Qatar, insisting that the Black Stars will not be overawed by their Group H opponents - Portugal, Uruguay, and South Korea.

"These are players we are going to play against and we play with them in our various clubs so obviously, we know them and from time to time, we've been learning their system.

"We've been getting used to their system so I think it's just a matter of time for us to think of a plan and strategy to go against them," he noted.

"If we do it right, by God's grace, we are going to make it. That could be possible, why not,” he stated.

Ghana will open the Qatar 2022 campaign against Portugal on November 24, before facing South Korea and Uruguay on November 28 and December 2 respectively.