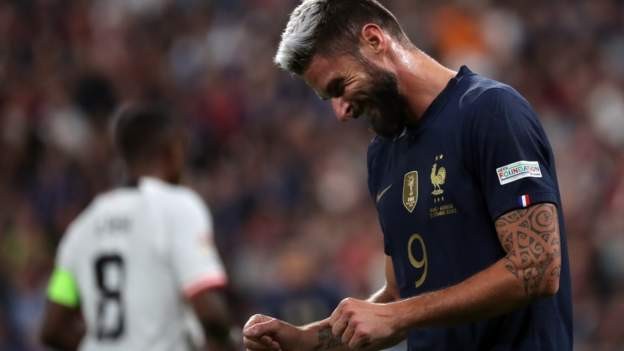 Olivier Giroud became the oldest scorer in France's history as they beat Austria to boost their hopes of avoiding Nations League relegation.

Les Bleus dominated, with Kylian Mbappe having an early goal ruled out for offside and Aurelien Tchouameni's bicycle kick being tipped onto the bar.

Giroud set up Mbappe for a fine opener, taking on several defenders before firing in from 16 yards.

Giroud is now only two goals behind Thierry Henry's France record of 51.

France, who would have been relegated if they had lost, move above Austria going into Sunday's Group A1 finale in Denmark.

Croatia have gone top of the group with a 2-1 win against Denmark, who would have sealed top spot themselves had they won in Zagreb.

Defender Borna Sosa put the hosts ahead with his first international goal. Manchester United midfielder Christian Eriksen levelled with a sensational long-range strike, but two minutes later Lovro Majer scored the winner from outside the box.

Croatia just need to beat Austria on Sunday to qualify for next year's finals and book a Euro 2024 play-off place.

Attempt missed. Kylian Mbappé (France) right footed shot from the left side of the box is high and wide to the right. Assisted by Ousmane Dembélé following a fast break.

Attempt missed. Kylian Mbappé (France) left footed shot from outside the box is high and wide to the left.

Attempt blocked. Christoph Baumgartner (Austria) right footed shot from the right side of the box is blocked. Assisted by Romano Schmid.

Ousmane Dembélé (France) wins a free kick in the defensive half.

Youssouf Fofana (France) wins a free kick in the attacking half.

Is cooking food in an air fryer 'healthier'?: Sliced Bread grills a food scientist and the BBC's Good Food Magazine to find outThe champion ignored by the world: Meet Ora Washington, who fought to make her name in racially segregated America