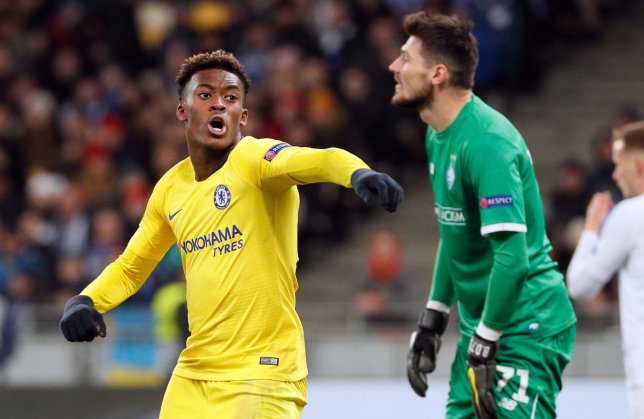 Former Chelsea legend, Glenn Hoddle claims Callum Hudson-Odoi might leave the club at the end of the season.

The highly-rated winger was on the verge of joining Bayern Munich for a fee of 35 million pounds in the winter transfer.

The Ghanaian handed a transfer request to the club due to lack of playing time at the club.

However, the 18-year-old has been impressive in the Europa League scoring four goals.

‘I think he’s better on the left side when Pedro came on he was better,’ Hoddle said on BT Sport.

‘He’s a finisher. He looks like he can play wide, all the best wide players they arrive as a centre-forward. He finishes.

‘I think he’s going to be a goalscorer as well, which is an added bonus when you’ve got a player out wide.’

And while Chelsea are hoping Hudson-Odoi will sign a new long-term deal before the summer, Hoddle advised the forward to leave Stamford Bridge if he continues to be sidelined.

‘If you’re good enough you’re in. The lad has got talent,’ he said.

‘If he’s not going to get consistent football at Chelsea then he’s got to go somewhere else.

‘Now is the time he needs consistency. We’ve got to see whether he can be consistent.

‘We’ve got to see when he has a bad spell, can he come back. These are the learning curves as a youngster you need to go through.’

Chelsea will play Slavia Prague in the qurterfinals of the Europa League.