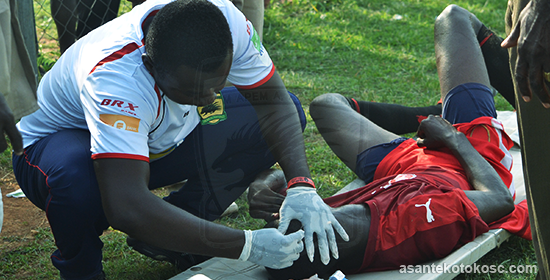 Members of Kotoko’s medical team earned loads of commendation on Sunday afternoon when they swiftly left their bench to attend to two Bekwai Youth Academy players who collided in the course of the match.

Goalkeeper, Evans Abeka and his captain, Alfred Owusu,collided on the hour mark as they tried to pull the brakes on menacing Kwame Boateng, who ran into the penalty box with everything showing that, he would release the trigger to wreak havoc.

That havoc could have only been his second goal of the match. But Evans Abeka and Alfred Owusu in seeking to prevent Kwame Boateng from scoring, clashed resulting in a casualty.

Evans Abeka crashed his mouth into his captain’s head. Both players suffered deep cuts in the process but they had no medical care until the Kotoko medics intervened. Whereas Evans had a cut on the upper lip of his mouth, Alfred suffered a head injury with blood oozing terribly.

Sensing danger, Kotoko medics – Gabriel Ofori Adjei and Andrew Amankw both medical staffs at the Accident and Emergency Unit of the Komfo Anokye Teaching Hospital, Kumasi; though not obliged to help, frantically rushed to the scene.

After 12 minutes of treatment, Evans Abeka was able to continue the game. Alfred Owusu’s cut was expertly stitched before he was substituted. This drew massive applause from the spectators many of who praised the Kotoko medics for their deep sense of professionalism.

After the game, officials of Bekwai Youth Academy and their fans were so thankful to the two Kotoko medics and the club as a whole. Gabriel later has this to say to Asantekotokosc.com.

“Ours is to save lives. We don’t have to leave that call. We are professionals. In fact, what you find at almost all the centres in terms of health care delivery during matches are way below standard. It’s serious. We have to do something about the situation” said the Kotoko medic.