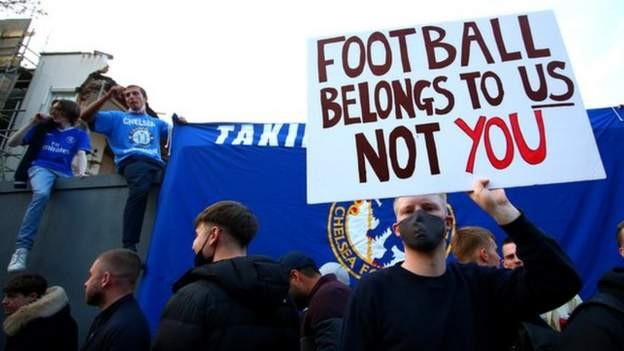 The creation of an independent regulator for English football (IREF) has been "endorsed in principle" by the government.

The idea is the primary recommendation of a fan-led review of football governance, which has been welcomed by Culture Secretary Nadine Dorries.

In a ministerial statementexternal-link she said the government will work on a "substantive response" to be presented next spring.

"We are at a turning point for football in this country," she said.

"Football requires a strong, independent regulator to secure the future of our national game.

"The government will now work at pace to determine the most effective way to deliver an independent regulator, and any powers that might be needed."

Fan-led review - what is being recommended?

The review was chaired by former sports minister Tracey Crouch, who told BBC Sport that English football needs an independent regulator to stop it "lurching from crisis to crisis".

Dorries responded on social media,external-link saying: "We've seen clubs with centuries of traditions, such as Bury and Macclesfield Town, disappear entirely, while the European Super League threatened the very foundations of the game.

"The review also lays bare that incentives in the game all too often lead to reckless financial decision making.

"Football clubs are the hearts of their local communities, and this government will ensure they are properly run and fans are protected."

One of the report's 47 recommendations is for a pilot on the sale of alcohol in sight of the pitch at selected League Two and National League matches.

The UK's football policing lead, chief constable Mark Roberts of Cheshire Police, said: "There is a clear link between alcohol and poor behaviour, not just in football but broader society, and increasingly we are seeing growing concerns in rugby and cricket about the negative impact on fans' experiences.

"At a time when we are seeing worrying instances of violence at football at all levels, the timing of this proposal seems quite bizarre and if it were to lead to changes in the current legislative approach it would be an irresponsible act that would lead to more violence in our stadiums."