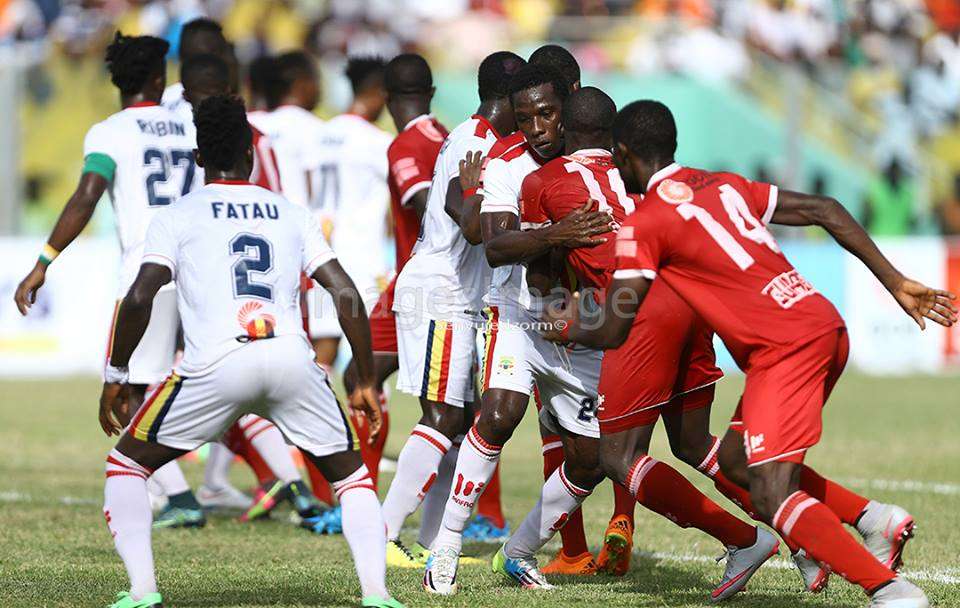 Hearts of Oak will battle out with Kotoko in an exciting derby clash in the week 8 of the 2016/2017 Ghana Premier league at the Accra Sports Stadium on Sunday.

The Phobians have had a patchy start to their campaign having won two, drawn three and lost two from seven games whereas their rivals, Kotoko have had a bright start winning five games and drawing two.

However, Frank Nuttal's men have conceded seven goals so far this season with Zdvrako Lugarusic's men letting in just one goal.

Hearts and Kotoko have met 53 times in the Ghana Premier League since its inception in 1958 at the Accra Sports Stadium. The former have won 16, latter 16 and 21 have ended in a draw. When both sides met at the same venue last season, it finished 2-1 in favour of the Porcupines.

The Phobians currently occupy the ninth position with nine points from seven games while the Porcupines sit second with 17 points.

Second-bottom Bolga All Stars will be looking to deny Bechem United the oppprtunity to climb to second when both sides slug it out at the Utretch Park in Wa with Mysterious Ebusua Dwarfs welcoming High-flying Aduana Stars to the newly- built Cape Coast Sports Stadium.

In other premier league encounters, Struggling Ashanti Gold will look to make it two wins in a row as they travel to Cape Coast as guest to Elmina Shark whereas Tema Youth who defeated Hearts of Oak 2-1 in mid-week face a tough away trip to Inter Allies.

Elsewhere, Liberty Professionals will look to respond to their midweek's 1-0 defeat by Ashanti Gold as defending champions, Wa All Stars rolls up at the Alhaji Sly-Tetteh Park in Dansoman as Medeama SC lock horns with bottom-of-the-table Great Olympics at the T and A Park in Tarkwa.

Finally, West African Football Academy (WAFA) will be hoping to spit vernom against champions a league chasing Berekum Chelsea when they square-off at the Red Bull Arena in Sogakope.