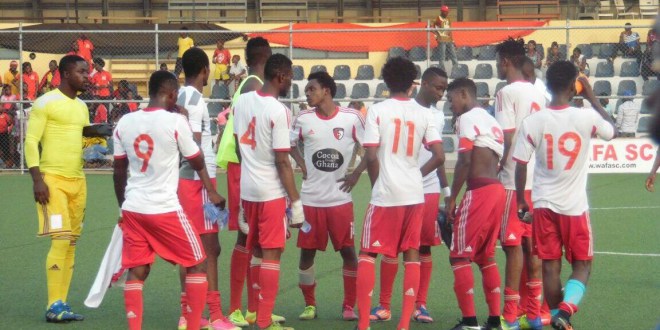 Star man, Daniel Lomotey hit a brace for WAFA in another remarkable away win, which also stretches their winning run to five matches. Lomotey’s brace gave WAFA a comfortable 2:0 lead at the Nduom Sports Complex, before Samuel Arthur scored a late consolation goal for WAFA.

With Aduana’s match against Olympics being rescheduled to Monday due to rains and Asante Kotoko dropping home points, WAFA have now opened a four-point gap at the top.

In Kumasi, Asante Kotoko’s winless run has now stretched to four matches after yet another frustrating goalless home draw against Ebusua Dwarfs in Kumasi.

Kotoko remain in second place with one point advantage, but have played two more games than third-placed Aduana Stars.

Bechem United maintained their 4th position on the table with a 1:0 win over Inter Allies in Bechem. Nana Antwi Manu scored for Bechem late in the game to give them all the three points.

In Obuasi on Saturday, Hearts of Oak deepened the woes of Ashantigold by beating them 1:0, with Paul Acquah scoring the only goal of the match.

The games between Tema Youth and Wa All Stars in Tema, as well as the Great Olympics and Aduana Stars have been rescheduled for Monday due to heavy rains.