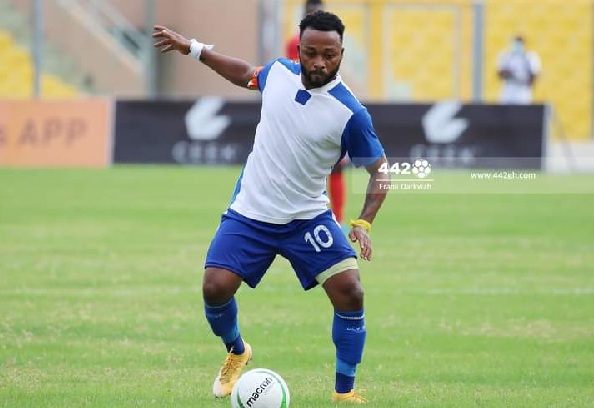 Great Olympics captain, Gladson Awako, has fired a warning to their regional rivals, Hearts of Oak ahead of their derby on Friday, January 29 at the Accra Stadium.

According to him, his side are in fine form and confidence was running deep in the side to defeat Hearts this season, and believes the results will be different in this season’s encounter.

In an interview, the former TP Mazembe midfielder said he was looking forward to proving a point in the Accra derby since those clashes always brought out the best in players.

Awako noted that his team currently possessed a solid squad that would trouble Hearts unlike the depleted side they presented in their last outing.

“I can’t wait for that clash, it is going to be a tough contest and I can assure you that it is definitely going to be a different result this time around," he told Graphic Sports.

“This is a derby match over who rules Accra and we want to prove a point that we are the best in the capital by beating them. That is the only way to do that,” Awako added.

Awako has scored important goals that have propelled his side to four wins and two draws in nine matches, including last Friday’s 2-0 victory over Inter Allies.

He is regarded as the most improved player in the competition so far, having won the Ghana Premier League’s NASCO Player of the Month award for December.

A recipient of three Player of the Match awards this season, Awako has scored three goals for his side, including a brilliant strike against AshantiGold in Accra on January 10.

Olympics, who are now handled by Yaw Preko, a former player and coach of hearts, have set a target of finishing among the top four of the Premier League at the end of the season.

Great Olympics will play league leaders Karela United in the matchday10 games this weekend at the Accra Sports Stadium.