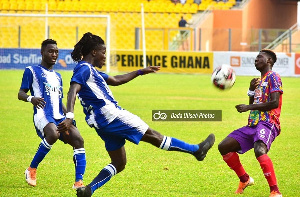 Great Olympics coach Yaw Preko has named his starting 11 for the Ghana Premier League game against city-rivals Hearts of Oak.

The Dade boys face the Phobians in the Ga Mantse derby at the Accra Sports Stadium as they seek to maintain their winning run. Olympics have inflicted a back-to-back defeat to Hearts of Oak last season.

Ahead of the much-anticipated clash, Yaw Preko, who joined the club as replacement for Annor Walker has announced his starting 11.

Below is the Starting 11: