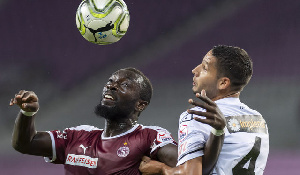 Servette striker Grejohn Kyei has reached double figures for goals this season after netting for the 12th time on Wednesday night.

The former Lens player scored as Servette suffer a disappointing 4-1 defeat against Lausanne on home turf.

He has been a key cog to the side in the ongoing campaign and has become a subject of interest for several European clubs.

The 25-year is placed 3rd on the top scorers chat behind Arthur Cabral of Basel and Jean Pierre Nsame of Young Boys tied on 18 goals.