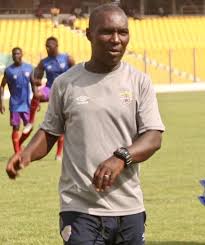 Interim Hearts of Oak coach Edward Nii Odoom is confident win over Ebusua Dwarfs could help revive their league campaign after a slow start to the season.

The Phobians secured their first win of the 2019/20 Ghana Premier League season with a 2-1 victory over struggling Ebusua Dwarfs at the Accra Sports stadium.

The win lifted them out of the relegation after losing their opening two games to Berekum Chelsea and Medeama SC.

"We controlled the game for large periods against Dwarfs and, this is testament to what we have been doing at the training ground and, I am positive about our chances for the future", he said at his post-match press conference.

"I look forward to the future with high hopes and, we will build on this performance in our upcoming games."

Hearts of Oak will travel to Sogakope to face WAFA on match day four of the Ghana Premier League and will be hoping to avoid the 5-0 thrashing in 2017.