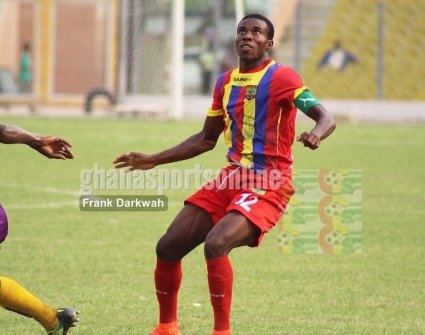 Accra Hearts of Oak coach Frank Nuttall appears content with his current squad as the club has made no move to sign a player as yet.

The second registration window opened for a one-month period on 15 April, with some clubs already in brisk business to shore up their squads.

In recent days, former Kotoko front-man Amed Toure sparked talks of an imminent move to the Phobians after claiming he had been contacted.

But the communications director for Hearts, Opare Addo denied the claim.

“I can state on authority that this is not true. We have not contacted any player at the moment. In fact, we are not in the [transfer] market at all.

“Our coach is currently away [in Scotland] and has not requested for any new additions. We could end up not signing anyone because we are solely acting on his recommendations,” he told supersport.com.

The Phobians, after a slow start to the season, have steadily moved up the league log and now occupy fourth position after 13 games. They next host leaders WAFA SC on Monday, 8 May.