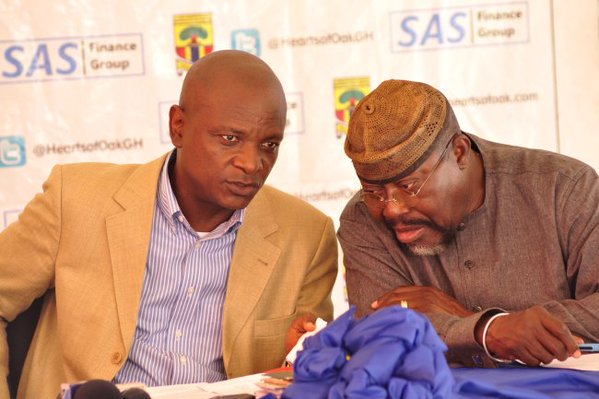 A Board member of Accra Hearts of Oak, Dr Nyaho Nyaho-Tamakloe, has praised the Phobians for their magnificent performance which resulted in their 3-1 victory over rivals, Kumasi Asante Kotoko, last Monday.

He said team spirit and the never-say-die attitude displayed by the Phobians spoke volume of the significant transformation the team had undergone and was positive about the club’s chances in the league if they maintained the same tempo.

The former Ghana Football Association (GFA) chairman who spoke to the Graphic Sports after his team's victory in the Ghana at 60 President's Cup at the Accra Sports Stadium, was confident the club would easily grab the GH¢50,000 prize money for the two-leg affair because there was no way the Porcupine Warriors could claw back the 1-3 deficit during the return leg at the Baba Yara Stadium on May 28.

While celebrating Hearts' victory, Dr Nyaho-Tamakloe, however, expressed his disgust about an unpleasant situation under a directive was issued to deny management of Hearts access to the Presidential box moments before kick-off.

This, he explained, nearly marred the game because they were ready to pull out of the competition in the last hour should they be denied usage of the presidential box without any explanation.

But the intervention of Youth and Sports Minister, Isaac Asiamah, according to Dr Nyaho-Tamakloe, saved what could have been an embarrassing spectacle before the President and his vice, Dr Mahamudu Bawumia together with other dignitaries at the stadium.

"I received a call from Hackman (an administrative officer of Hearts) telling me about a directive to bar the management of Accra Hearts of Oak from using the Presidential box and not too long after that Togbe Afede also called me with the same complaint", Dr Nyaho-Tamakloe stated.

He said that urged them to instruct the PRO of the club to issue a statement of boycott should their demand to use the Presidential box be rejected.

He subsequently expressed gratitude to the minister who contacted the national security to ensure the situation was rectified to ensure a smooth and exciting game.

He looked forward to a much better and thrilling game in the return leg in Kumasi.