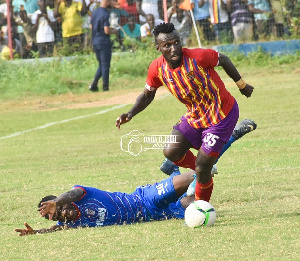 Hearts of Oak duo Caleb Amankwa and Emmanuel Nettey could feature when the side face Wydad Athletic Club of Morocco in the CAF Champions League on Sunday.

Earlier report in the local media suggested the pair is unlikely to feature when Hearts of Oak take on WAC on Sunday.

However, according to the club’s Spokesperson, Opare Addo, the duo situation looks positive and may feature against WAC of Morocco.

“Even though there have been some knocks, the medical team is working so well on them and things looks positive, they may be available for selection considering how good the medical team work on them” he told Koforidua based Aben FM.