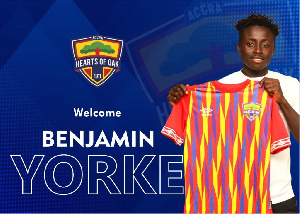 Hearts of Oak forward Benjamin Yorke has disclosed he is not worried about his lack of playing time at the club.

Yorke, who joined the Phobians on a four-year deal before the start of the 2021/22 Ghana Premier League campaign has failed to live up to expectation.

He has been left in the cooler after falling down the pecking order to Afriyie Barnieh, Kofi Kordzi and Kwadwo Obeng Jnr.

The youngster was tipped for greatness before joining the rainbow boys due to his exploits in the Division One League with Samartex.

In an interview, Yorke said he is not perturbed about his lack of playing time.

“Football is about time, so I don’t have to rush even though I am not playing regularly. I have been doing personal training and that is pushing me a lot. Whenever the opportunity comes, I will prove my worth” he said.

Reports went rife the highly-rated forward will return to his former club on loan when the season comes to an end.