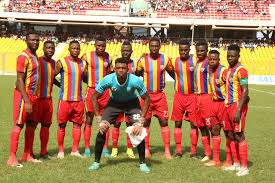 Hearts of Oak are set to embark on a pre-season training tour in Nigeria ahead of the start of the new season, according to Oyerepa FM.

The Phobians will be engaged in a series of high-profile friendlies during the three-week period.

According to Oyerepa FM, Officials of Hearts of Oak are in advanced talks with some Nigeria Premier League clubs for friendly games before returning to Ghana to wrap up their preparations for the new season.

In addition, Hearts will play against the Nigeria U-23 team that have qualified for the 2019 Africa Cup of Nations.

The Accra based side have augmented their squad with Bernard Arthur, Dominic Eshun and Emmanuel Mintah as they prepare for the new Ghana Premier League season which is expected to start next month.

The former CAF Champions League winners are expected to leave the country in the coming days to begin their pre-season tour in Nigeria.