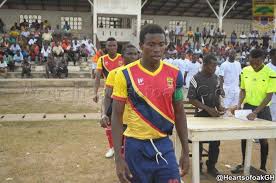 Accra Hearts of Oak skipper, Thomas Abbey has showered praises on coach Frank Nuttall for the winning mentality he has brought into the side.

The 26-year old midfielder, who has had a decent start to the season thus far expressed his delight with the Scottish trainer's mentality to games and says it could aid their ambition of ending their long league title drought.

“That attitude is giving your all on the pitch helping the team and every player to develop well, it’s having a good game and understanding why you won. So, he looks to pass this on to the team. We have gotten this because of the collective effort in the side.”

Hearts will travel to the Berekum Golden City Park on Match Day 9 of the ongoing league to engage Berekum Chelsea.