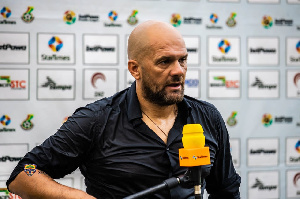 The Ghana FA has been in the haunt for a new coach following the resignation of Otto Addo after the 2022 World Cup.

Reports went rife that, Hearts of Oak gaffer Slavko Matic has submitted his application in a bid to land the Black Stars coaching job.

Reacting to it, the supporter’s chairman of the club said, “If it is true that he has applied for the job, I think management and the board will make a decision on it and if he (Matic) has informed them there will be a communique to clarify any doubt because most of the supporters have been talking about it and I think management should be a bit proactive in bringing out a communique to calm the tension”

“We have a big game against Medeama and I think this is not the time for confusion. The fans should keep calm until management comes out with a communique”

Hearts of Oak will travel to Tarkwa for their matchday 14 clash against Medeama on Saturday.