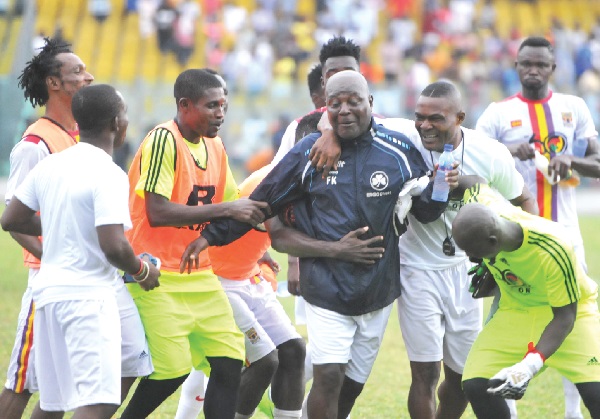 Kotoko Hearts of Oak’s assistant coach, Henry Wellington and some of his players celebrating the club’s 3-1 win over Kotoko

Accra Hearts of Oak’s deputy coach, Henry Lamptey Wellington, is confident that his side can beat Kotoko again in the return leg of their 60th Independence anniversary celebration match at the Baba Yara Sports Stadium on May 28.

Back to back victories over Kotoko within a space of two months have buoyed the confidence of the Phobians and given them legitimate bragging rights, especially after last Monday’s emphatic 3-1 win at the Accra Sports Stadium watched by a sizeable crowd, including President Nana Akufo-Addo and his vice, Dr Mahamudu Bawumia.

On March 19, Hearts defeated Kotoko 1-0 in a Premier League match in Accra via a controversial spot kick converted by Vincent Atinga.

Coach Wellington — who took charge of the team in the absence of his boss Frank Nuttal — said his charges displayed good teamwork and played with passion to silence the Porcupine Warriors and gain a healthy advantage into the return leg of the President’s Cup match in Kumasi where the Phobians traditionally perform well and have not lost to their arch-rivals since 2012.

“Just as I prepared the boys’ mind for a do-or-die affair in the first encounter, that’s the same policy we are going to use on May 28 in Kumasi. I’m confident we are going to win again,” a confident Wellington told the Graphic Sports via telephone yesterday.

Despite being carried shoulder-high by some of his players and backroom staff after last Monday’s victory, Wellington was gracious to credit his boss for his role in putting together a winning strategy from his Scotland base.

“I spoke with Coach Nuttal on phone for days leading to the match and we came up with a plan to upset the odds,” he admitted.

Wellington explained that the introduction of Kwame Kizito in the second half of the game was the turning point in last Monday’s clash as Kotoko’s game plan crashed in the four-goal thriller.

“The introduction of Kwame Kizito was the difference. He changed everything and created the avenue for us to get more goals,” he stated.

Hearts were dominant right from the opening minute, keeping their opponents at bay with Winful Cobbinah and Thomas Abbey dictating the pace of the game.

Kotoko were listless in most instances and created few chances upfront and were not menacing in attack. However, Coach Frimpong Manso’s side paid dearly for two howlers by young goalie, Felix Annan which gifted the Phobians two goals.

Hearts opened the scoring in the 65th minute through Kizito who stripped annan of the ball to score. But Kotoko levelled up two minutes later through a powerful header by centre-back Awal Mohammed.

The Phobians increased the tally late into the game through Abbey before enterprising winger Patrick Razak put the game beyond Kotoko with Hearts’ third goal in the 90th minute.

Coach Wellington was hopeful that the victory would reflect in subsequent matches as the Phobians come up against table-topping WAFA in Accra this weekend.