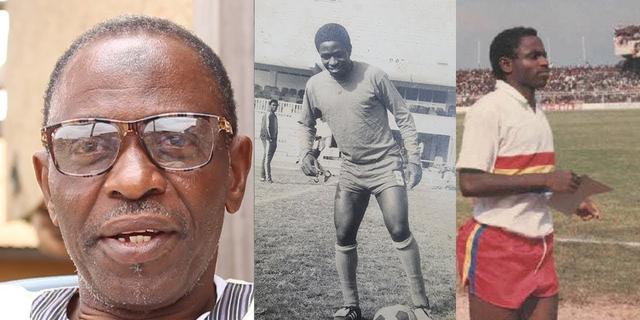 In 1973 when 18-year-old Mohammed Ahmed Polo burst on the national football scene, I was Sports Editor of the mass circulation state-owned newspaper, Daily Graphic.

I had passed through the mill in a 12-year drill, starting from September 1961, to earn that position. I took over from my immediate boss the veteran horse racing pundit, Nana Addo Twum, affectionately known in horse racing circles as Dan Rana.

The intensive drill and supervision by experienced senior journalists plus the numerous on-the-spot coverage of both local and international sporting events at home and abroad had widened my scope large enough to be capable of identifying potential legends in many sports disciplines especially football, Athletics, Boxing and hockey my favorites.

My pick of Polo as a future football legend, therefore, had a firm basis and subsequent events proved me right.

It was no joking matter at the sports desk of the Daily Graphic. Management had determined sports coverage was a seller.

In other words, it boosted the newspaper’s circulation. No wonder it came to pass that within a decade at the Graphic sports desk, I had traveled nationwide to cover league matches at the various centers not to mention big international games like the 1963 Afcon hosted by Ghana and the maiden CAF clubs’ championships involving Ghana’s model club, Real Republikans, Oryx of Cameroun, Stade Mali and Cotton Club from Ethiopia in 1965.

Earlier, I had covered the annual Ghana-Nigeria athletics championships in Ibadan and the first World boxing featherweight title fight between local boy Floyd Robertson and Sugar Ramos of Cuba in Accra, May 1964.

In 1966, I took advantage of a three-week educational tour of then West Germany to watch some exciting Bundesliga matches involving Bayern Munich and Dusseldorf.

I was in Sudan in 1970 for the Afcon that saw Ghana losing the cup 1-0 to host nation Sudan. Sad to recall that, the Ghana contingent was deported a few hours after the match by the then Military government in Sudan for allegedly showing disrespect to the head of state by refusing to collect the silver medals after the match.

It’s a whole story to be told in detail another time.

After this debacle in Sudan, I was privileged to be among five journalists that accompanied Accra Hearts of Oak on a three-week tour of England in 1970. The others were Joe Aggrey, Oheneba Charles, Stephen Borquaye, and John Adoboi.

It was a hectic tour that showed the wide gap in the standard of play between Ghana’s club football and that of England. This is also another story that needs to be told at another time.

Having seen some brilliant football in England, I was once again privileged to be in West Germany again for the Munich Olympics in 1972 to witness top-class Olympic football, especially from the Eastern European countries who paraded their very top stars because they were then not in professional football, and were considered to be amateurs.

They had a big advantage because the Olympic Games then featured only amateurs. Incidentally, the Black Stars were matched against the then East Germany in the first game after the opening ceremony. Guess what? The Stars were trounced 4-0 by the East Germans despite the tumultuous crowd support for the Third World underdogs. This is also another story to be told in full another time.

Ladies and gentlemen, all this rigmarole is to inform you that I had seen enough in the sporting world to enable me to recognize a potential sporting legend if I saw one. And this was what happened in the case of Mohammed Ahmed Polo, affectionately called the Dribbling Magician when I saw him in his first league match for Accra Hearts of Oak against Abuakwa Susu Biribi in March 11 1973 in the season’s opening league match at Tafo Rovers Park.

The youngster was simply amazing with immaculate ball control and tailor-measured passes.

Incidentally, Hearts lost the match 1-0 but got the points later on from the board room. It was detected Susu Biribi fielded an unqualified player Mike Accorley who was found guilty of double registration.

Polo’s trademark accurate passes were well studied by teammate Peter Lamptey who utilized them to become the first goal king of the newly constituted concept by the Sports Writers Association of Ghana (SWAG) that year. He netted a total of 21 goals in 26 matches.

It appeared Polo took more delight in making goals instead of scoring them. In modern parlance, it is called “assists”. The few he scored appeared so special that some writers gave him the appellation of the scorer of important goals.

History recalls that his most remarkable brace against city rivals Great Olympics happened exactly on the first anniversary of his league debut for Hearts.

I am writing about Polo the legend because he is in the news. A book on his illustrious career has been launched.

As fate would have it, I had the privilege of writing the foreword for the book authored by Nii Odai Anidaso Laryea. Here we go with my foreword.

“I thought I was the undisputed number one admirer of the reputed Dribbling Magician Mohammed Ahmed Polo until I had the privilege to read this memorable narration by Nii Odai Anidaso Laryea and I quickly had to revise my notes.

Nii Odai Laryea is, in fact, fanatical about Polo to a fault. In his, estimation Polo is the most colorful player to wear football boots for the money. The world is yet to see a more attractive footballer than the Nima-born football artiste. I doff my hat for Nii Odai Laryea.

I was Sports Editor of the mass circulation Daily Graphic in 1973 when Polo hit the limelight with his amazing football skills. I have to disclose the fact I was among the group of sportswriters that gave Polo the appellation of Dribbling Magician later on progressing to Dribbling Professor after many other accolades had been showered on him.

The young boy was not only an amazing dribbler but could score some vital goals especially when the going was becoming tough for his team. Emmanuel Amoako, my deputy at the sports desk, came up with the tag “scorer of important goals”.

I was so fond of the young dribbler who made Dribbling part of himself, like breathing, so much so that I decided in my capacity as the Sports Editor, to cover the majority of the matches he featured in.

This practice continued for a long time and I used all the superlatives I could assemble. There were times I had to struggle to find new words to describe Polo’s football artistry. I was short of vocabulary.

I recall the Famous “Miracle of El Wak ” in 1977 when Hearts of Oak had to conjure three amazing goals in the second half to beat visiting Mufulira Wanderers of Zambia to erase a 5-2 defeat in an Africa Cup semi-final second leg.

My excitement and desire to paint an exceptionally vivid picture of Polo’s contribution to Hearts success that day took me an unusually long time to finish writing the story.

I had to change my introduction several times until my senior colleague, the late Yaw Boakye Ofori-Atta, drew my attention to the fact that my fanaticism for Polo was delaying production, amidst laughter from my colleagues.

I admired Polo to the hilt and even initiated the formation of a ‘Polo Fan Club’ that existed only on paper using the sports columns of the Daily Graphic to continually celebrate his birthday. I was that fanatical but please wait until you finish reading Nii Odai Laryea’s narration and you will find mine to be child’s play”.

Cheers everybody and Keep loving sports.