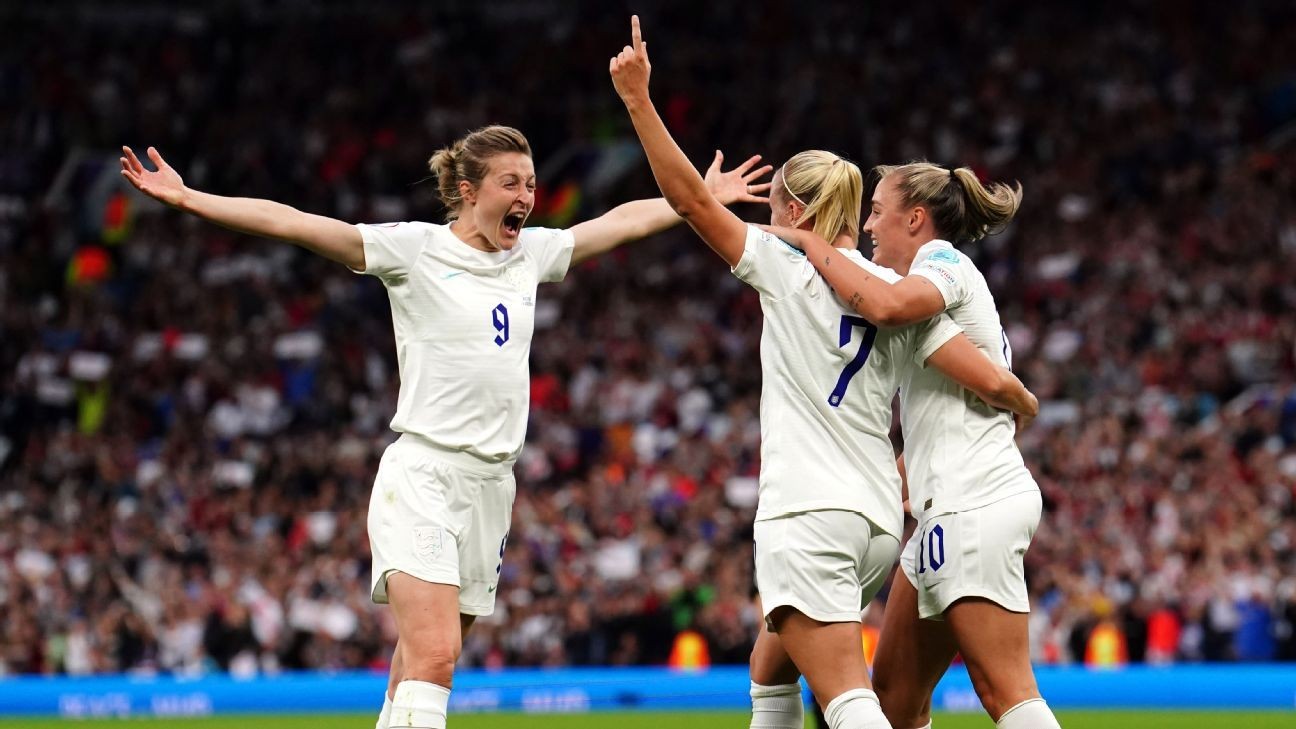 MANCHESTER -- After the rehearsals came the real deal in front of a sold-out Old Trafford.

For all the preparation, tactical switching and talk of answering the pressure of the situation, this was to-date the definitive test of Sarina Wiegman's tenure leading England as they opened this summer's home European Championships in front of a record crowd for this tournament of 68,871. And thanks to Beth Mead's 16th-minute winner, they passed their first examination with a 1-0 win but will be aware of where they need to improve.

This was far from perfect, but opening matches don't need to be -- they rarely are performances worthy of the champions-elect. The Euro 2022 trophy won't be won tonight, but aspirations can suffer a monumental dent if points are dropped, or injuries suffered. Thankfully for Wiegman, her squad came through unscathed and they kept Austria at bay and got the full three points. But Wiegman will scrutinize the second half -- Austria dominated possession, England lacked of clear-cut chances despite moments where they had players open and passes failed to find feet.

Women's Euros big questions: England or Spain to win it all? Or will Netherlands, Germany go on a run?7dBill ConnellyEuro 2022: Can Ada Hegerberg be Norway's hero? Why winning might require more than just the star's return1dSophie LawsonFrance's toughest opponent at Euro 2022? Themselves5dSophie Lawson

But that examination can wait for the morning as England needed this win to not only settle nerves but maintain expectations.

"I've been to a few major tournaments and what's drilled into you is getting those points on the board," Georgia Stanway said. "It wasn't the standard we want to be at. There was a bit of relief at the final whistle -- but we got points on the board."

What this victory proved, once again, was how well Wiegman judges her selection, her knack for making substitutions at the right time, and how instrumental a champions' mindset will be. But that's not to say she didn't spring an uncharacteristic surprise.

For all the order, Wiegman making a late change to the heart of England's defence went against the grain of her first 14 matches in charge. Having used the preferred centre-back partnership of Millie Bright and Alex Greenwood for much of her tenure with Leah Williamson in midfield, she scrapped that for her biggest game so far. She shifted Williamson back alongside Bright, moving Stanway in to partner Keira Walsh as their midfield pivot. She also went with Fran Kirby as England's playmaking lynchpin at No. 10.

England's lone goal came from Beth Mead in the 16th minute, an early goal that took some of the pressure off the Lionesses playing in front of a sold-out home crowd to open Euro 2022. Martin Rickett/PA Images via Getty Images

The England players And Wiegman frequently talk of pressure being a privilege, but looking at the pre-match selection, which went against the team she'd been defaulting to, the bold call came down to one of two possibilities. Wiegman was either A) an attempt to use the champion's mindset that the FA has been so keen to tap into or B) a sign of that pressure clouding previous clarity. But, of course, the call turned out to be the former.

When the players walked out at the start of the match they were greeted by a wall of white and red. At the home of Manchester United, any norms were absent -- the sound of Liverpool anthem "You'll Never Walk Alone" springing out at various stages from the adverts on the television was jarring -- but for tonight, this was the Lionesses' home.

You could've forgiven some players for being taken aback by the noise -- it was the sort that reverberates through you and no amount of preparation can prepare you for that. But in the midst of the magnitude of the occasion, was the underlying mission of getting this off to a winning start. They appointed Wiegman to win this tournament and to make the changes and selection calls at the right time. She did that even before today, like when she included Kirby in the 23-player squad for the Euros despite her not having started a competitive match since February due to fatigue prior to the announcement. While the lack of match practise was enough for Wiegman to cut aside ex-captain Steph Houghton, she saw enough from Kirby to know that if she had enough time to build up her match fitness, then she'd be a game-changer.

Both the trust Wiegman had in Kirby and Kirby's own resilience in making yet another successful comeback after a spell out paid off. It was her assist which teed up Mead for England's opener -- a neat effort as she dinked it over the on-rushing Manuela Zinsberger -- and again it was her pass to Lauren Hemp who then crossed for Ellen White to head wide. Late in the first half Kirby again picked apart Austria's defence with a perfectly weighted through ball to Lucy Bronze.

While Kirby was influential in the No. 10 role, the call to start Williamson at centre-back allowed Wiegman to play an axis of Stanway and Walsh, and the former -- who'll be at Bayern Munich next term -- was instrumental in disrupting the Austria attack. Stanway stayed close to the dangerous Laura Feiersinger and was superb in that sitting role, and key in England's transitional play.

As they looked to win the ball back, Mead at times slotted back in as a third central midfielder alongside Stanway while Walsh worked in tandem with Hemp on the other flank. As they moved into the middle of the pitch, Bronze and Rachel Daly stayed wide monitoring those areas, which allowed England to squeeze the ball off Austria, causing them to run down blind alleys, and then counter with Stanway running the ball out, and Bright hitting her teammates with those perfectly weighted cross-field balls. Stanway was England's outstanding player.

Up front, England's front four of White, Mead, Hemp and Kirby worked well, and their movement must be a nightmare to play against, with Mead and Hemp shifting flanks, and Kirby popping up with those neat through balls or bisecting runs. This was White's first start for England since contracting COVID-19 back in mid-June, which saw her miss the friendlies against Netherlands and Switzerland. But while she failed to add to her record haul, it's her ability to draw defenders away and create space for her teammates that is so invaluable. She had one half chance in the first half as she headed over from close range.

White's frustrations were indicative of this performance and one of the areas Wiegman will look to improve. The England manager frequently talks of the need for ruthlessness and she would have wanted England to have scored earlier on in the second half to wipe out any Austrian optimism. Time and time again White found space in the box, but the pass was lacking. England's chances more often than not came off the back of individual skill and trickery, rather than through structure.

England also looked a little shaky in the early exchanges -- reminiscent of that match a fortnight ago against the Netherlands in a pre-tournament friendly -- where England had a habit of putting themselves under pressure but not clearing their lines. But while they needed a half-time reset to rethink their ability to play out from the back and clear pressure against the Netherlands, here they adjusted early on to manage the Austrian threats.

"I think we were a little rushed in the final third," Wiegman said. "We created lots of chances but that final touch on the ball, or whether to shoot or cross -- we can do that better. I think we lost the ball too quick . We didn't keep the ball well enough and then it looks like how it looks. In the last minutes we were very calm."

The English side also looked vulnerable to crosses -- Bright at one stage head to clear from underneath her own crossbar -- while Wiegman was at times calling for England to press more when Austria had the ball in their own third. And it took a great save from Mary Earps to keep out Barbara Dunst's curling effort in the 76th minute. Austria dominated much of the second half, but the substitutions on the hour mark blunted Austria's attack. Chloe Kelly offered a valuable outlet to offload the pressure and she fashioned probably the best chance for England as she shot wide.

At the full time whistle "Sweet Caroline" boomed out across Old Trafford. But celebrations were muted -- there was a look of relief, but also you can imagine them swiftly looking at lessons learnt, and areas to improve.

Still, as opening days go, this was exactly what England needed. From here the target on their backs will grow ever larger as the games clock up, but this was a stern first test. The key was winning this and England delivered, giving them a platform from opening night, but now they must build on it.