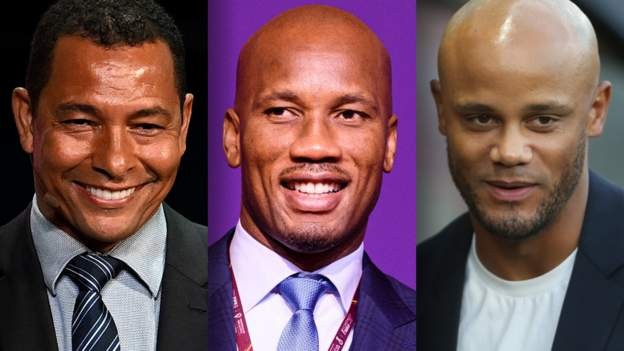 The Fifa World Cup 2022 starts in Qatar on Sunday, 20 November and you can follow all the drama and excitement throughout the tournament on the BBC.

The BBC is your destination for coverage 24 hours a day, seven days a week - with 33 matches televised live as well as live commentary on all 64 games on BBC Radio 5 Live.

Wales versus England will be shown exclusively live on the BBC, alongside England's opening game against Iran and Wales' crucial tie against Carlos Queiroz's side.

The BBC will air 33 live matches on TV and iPlayer across the tournament, while BBC Radio 5 Live and BBC Sounds will provide coverage of all 64 matches in Qatar. BBC Radio Wales and Radio Cymru will also cover all of Wales' games.

With live video streaming of BBC Sport's games and live commentary of every match on the BBC Sounds app, fans can follow the drama across any device.

BBC TV and iPlayer coverage kicks off with a mouth-watering week of games, after our exclusive live coverage of the opener between Qatar and Ecuador.

Fans can watch the majority of the BBC's games live in ultra high definition and high dynamic range via BBC iPlayer by using a compatible UHD TV and a high-speed internet connection.

Four of the home nations' six group stage fixtures are live and exclusive on the BBC, while blockbuster games from the other groups include Spain v Germany, as well as the first look at champions France, five-time winners Brazil and world number two side Belgium.

Gary Lineker, Gabby Logan, Mark Chapman and Kelly Cates will host with many great players of the past providing analysis

For TV and iPlayer, the BBC will have first pick of the semi-final stage of the tournament, along with three last-16 games, two quarter-final ties and, of course, the World Cup final on 18 December.

Highlights of non-live games and selected replayed matches will be available on BBC One and BBC iPlayer.

Fans will be able to watch highlights of every match and all the goals on TV, BBC iPlayer and the BBC Sport website.

Gary Lineker, Gabby Logan, Mark Chapman and Kelly Cates will lead coverage across TV, iPlayer and radio, alongside a host of great former players who will provide analysis.

Guillem Balague, Julien Laurens and Tim Vickery will provide expert voices on South America, Europe and the rest of the world.

England and Wales supporters will be able to pick their preferred starting line-ups for each game via the BBC Sport website and app, while also rating every player out of 10 for every Fifa World Cup match.

The website will also be home to our hugely popular live pages, where you can watch clips of all the goals as they go in, as well as the best reaction and punditry after games.

Also look out for…

Jurgen Klinsmann's Daily Newsletter - The World Cup winner will keep you across everything that is happening in Qatar with his daily email newsletter from BBC Sport.Into Qatar: A journey to explore a nation's relationship with football - The world of football was astonished when Qatar was selected to host the 2022 tournament amid corruption allegations and human rights issues. On 16 November, BBC Sport goes under the skin of football in Qatar to tell the story of the sport in the host nation and what hosting a World Cup means to the local population.How do you win a Fifa World Cup? - We look at five ways to win the prized trophy.Vintage video - BBC Sport will dip into the archives to relive some of the most iconic moments and matches in previous World Cups.Predictions - Radio 5 Live's Chris Sutton will predict the outcome of every game in Qatar. You can follow how he gets on for every round of matches. We'll also ask you to try to predict the winner of the Golden Boot.

Throughout the tournament, BBC News Online, BBC Wales News and Cymru Fyw will have all the daily updates from Qatar on England and Wales, as well as features with players, families and the fans. There will be news coverage of all the games and major events in England and Wales, including the squad announcement.

The BBC will showcase all the must-see moments on social media, including more behind-the-scenes content from your favourite Match of the Day pundits than ever before on Instagram and TikTok.

BBC Sport's YouTube channel will feature highlights of every game, while Facebook will deliver a mix of news stories, imagery and video - including match action - to our followers. Twitter will be the best place to tune in for in-play updates and breaking news.

5 Live Sport and BBC Sport Wales socials will be home to bespoke digital content straight from within the England and Wales camps.

Two BBC Sport documentaries will accompany build-up to the start of the World Cup.

The first, already available on BBC iPlayer, is Messi. Before what is expected to be his World Cup farewell, this wide-reaching documentary digs deep to gain a detailed understanding of the real Lionel Messi, including incredible footage of the Argentine superstar as a child prodigy - it is Messi as you've never seen him before.

The documentary, which features interviews with fellow Argentines Zabaleta, Javier Mascherano and Hernan Crespo, airs on BBC One on Saturday, 19 November, at 22:55 GMT.

Dropping on BBC iPlayer on Friday, 4 November, How To Win The World Cup will take the viewer deep into the dressing room to hear incredible tales from the past three World Cup-winning teams, France (2018), Germany (2014) and Spain (2010).

This is the inside story of how to lift the most famous trophy in the world, told by tournament winners including Germany's Manuel Neuer, Bastian Schweinsteiger, Per Mertesacker and Jurgen Klinsmann, Spain's Andres Iniesta, Xavi and Cesc Fabregas and France's Olivier Giroud and Marcel Desailly. The programme will air on BBC One at 22:30 GMT on Sunday, 20 November.

Elsewhere, exclusively on BBC Sounds, World Cup Ballers will see some of football's biggest stars go back to back with some of the BBC's biggest DJs in a special music mix. Listeners will hear combinations such as Danny Howard and England goalkeeper Jordan Pickford, Jack Saunders and Wales striker Kieffer Moore, and more.

The UKs most comprehensive and entertaining World Cup podcast, 5 Live's World Cup Daily, will be available every single day of Qatar 2022 on BBC Sounds.

Launching on Monday, 14 November, the podcast will be your daily dose of World Cup analysis, debate and news. With reporters in both the England and Wales camps, World Cup Daily will bring fans closer to the players, coaches and managers throughout the tournament.

Also from 14 November, Match of the Day Top 10 returns for a brand new series. Join Gary Lineker, Micah Richards and Alan Shearer as they focus on the biggest tournament of all... the World Cup.

Throughout the series, they will discuss the greatest goals, the most shocking moments and the biggest upsets. Fans can listen on BBC Sounds or watch on BBC iPlayer. Episodes will drop daily between 14-23 November.

In addition to live match coverage, 5 Live Breakfast will transform into the World Cup Breakfast Show with Rick Edwards and Rachel Burden for the duration of the tournament.

Live from Qatar, Rick and Rachel will bring listeners the latest news from the World Cup, as well as the usual national and global news stories as they happen.

606, the UKs favourite football phone-in with Robbie Savage and Chris Sutton, will air throughout the tournament. Listeners can expect irate rants, jubilant boasting and VAR complaints - and that's just from Robbie and Chris!

As Wales prepare for their first World Cup in 64 years, Welsh football fans will be treated to a variety of new series and programmes launching in the build-up to, and during, the World Cup.

All of the following programmes will be available on BBC iPlayer or broadcast on BBC One Wales:

Together Stronger - A landmark series charting the tumultuous and transformational 18-year period that took Wales from the depths of despair to their first World Cup in 64 years. When John Toshack took over as Wales manager in 2004, he made the crucial decision to start again with a talented pool of teenagers and new caps. Eighteen years and four managers later, four of those - Gareth Bale, Aaron Ramsey, Joe Allen and Wayne Hennessey - have propelled Wales from 117th in the world to a dream place at Qatar 2022, their first World Cup in 64 years. Late Night Football Club - A late-night entertainment and music series fused with football and presented by former Wales international Robbie Savage and broadcaster Polly James, along with film producer and football fanatic Jonny Owen. A fun and cheeky programme recorded in front of an audience of football fans, each episode will line up star guests to talk about all things football and will be packed with segments and challenges.Legends of Welsh Sport: Neville Southall - Number One - This is the story of a football icon like no other, the story of a binman, who became a legend, Neville Southall. Legends of Welsh Sport: Toshack - Football Maverick - A nostalgic film celebrating the remarkable career of Welsh football legend John Toshack. Legends of Welsh Sport: Robbie Page - History Maker - This is the remarkable story of the boy from Tylorstown who would change the fortunes of Welsh football forever. Rhondda boy Robert Page will be the first Wales manager to qualify for a World Cup since 1958 but little is known about the quiet stand-in manager who '"fluked" his way to the top job.Match of the Day Wales Special: World Cup Squad Announcement - A Match of the Day Wales Special live from Robert Page's hometown in the Rhondda where the Wales squad will be announced. The programme, filmed in Tylorstown, will capture the day's events culminating in a live broadcast of the announcement.Match of the Day Wales: Road to Doha - Join the Match of the Day Wales team for a very special preview programme as they kick off the build-up to the Fifa World Cup in Qatar. Find out everything you need to know as Wales prepare for the biggest sporting event of the year.

Newyddion S4C and Wales Today will also be live from Qatar with special programmes throughout the tournament.