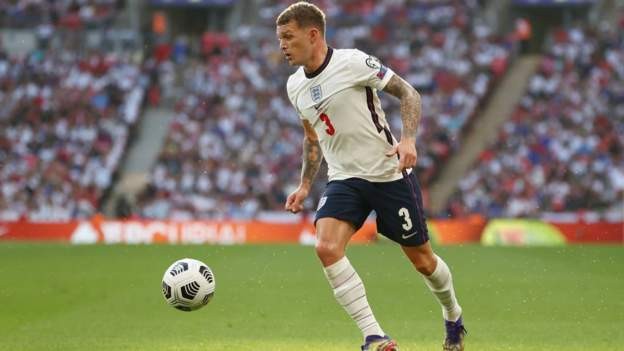 Moments after Kieran Trippier's disappointing Newcastle United debut had ended, he showed signs of what he could bring to the club as it embarks on a new era.

The Magpies had just been knocked out of the FA Cup at home by League One Cambridge United, a nadir in an already difficult season, which has brought just one victory and left them in the Premier League relegation zone.

Most of the players didn't acknowledge the near-capacity crowd at full-time but one who did was Trippier - and he encouraged others to join him. Though he was largely ignored, the 31-year-old was already trying to lead by example.

Arriving as the first signing since the approval of a Saudi Arabian-backed takeover at Newcastle United's new era, Trippier has expectation on his shoulders. After all, the club are now heralded as one of the richest in the world.

But, according to his former coaches and team-mates, the full-back has all the characteristics needed to prove an influential figure on Tyneside as he prepares to make his Premier League debut for his new club - Saturday's crucial visit of relegation rivals Watford.

"Kieran was tenacious, he always wanted to win," Jim Cassell, Trippier's former Manchester City academy director, tells BBC Sport. "It was common for kids and parents to be in awe of you as the boss. To me, it was important for them to grow beyond you in terms of leadership and the responsibility they have towards training and playing."

Cassell, who has known Trippier since he was nine, adds: "Going to Newcastle, 52,000 people are desperate to see him play and play well, what a responsibility that is."

'I wouldn't be surprised to see him become Newcastle captain soon'

Trippier left Manchester City in 2012, signed by Newcastle boss Eddie Howe at Burnley after a loan spell, before going on to Tottenham Hotspur and Atletico Madrid, captaining England once, and returning to his home country when he moved to Tyneside for £12m this month.

His mentality though was evident even as a student at Woodhey High School in Ramsbottom, Bury, Greater Manchester.

"When he was at school, people looked up to him," says Lee Garcka, Trippier's former PE teacher. "He would try to involve everybody and in lessons and matches. If things didn't go right, he wouldn't point fingers or blame people. He'd say 'we need to fix this, but we need to fix it together'. I wouldn't be surprised to see him become Newcastle captain soon.

"We were in the Year 10 cup final against a rival school who had beaten us the year before. He got everyone in a huddle before the game. I hadn't instigated it. I'd love to know what he said, but we won 4-1 and he scored a hat-trick."

As a schoolboy and an academy player, Trippier played in a more attacking role - "a bit like Wayne Rooney" - Garcka says, but it was at City that he moved to right-back.

"One Sunday morning we played at Derby County; we were short of defenders and so put him at right-back - and it was like a hand in a glove," Cassell recalls.

"He got the role straight away; he knew when to go, when to sit, he was an easy mover and a good runner. But he can play first-time passes and cross the ball on the run. That gives this [David] Beckham comparison. It is a brilliant asset for his strikers."

Former Canada centre-back David Edgar, who began his career at Newcastle, played with Trippier at Burnley - and feels his former team-mate is a quiet inspiration.

"Tripps is so good in possession and he's such a clever player," Edgar says. "He's also a silent leader. He won't shout but he shows how things are done and, playing as a left centre-back, I always felt secure when he was to my right. He starts off so many attacks.

"He knows Eddie, who brought him in from Manchester City, and he suits his style so well because he's so good going forward. He is someone who's game has grown as he's progressed. He's deserved everything he's achieved because he's such a hard worker and those amazing fans at Newcastle will love him for that."

In 2015, he moved from Burnley to Tottenham having impressed David Pleat, their former manager, who was advising the Londoners. After a slow start, Trippier became a mainstay in the side that reached the Champions League final under Mauricio Pochettino four years later.

"It was a combined decision to take the boy," Pleat says. "I went to watch him play for Burnley at Watford and he put two balls on a sixpence for [Jay] Rodriguez. He needs a team that is very good at keeping the ball in the middle of the pitch, so he's confident when breaking forward."

Trippier is also a key member of Gareth Southgate's England side, despite competition from Kyle Walker, Reece James and Trent Alexander-Arnold.

"He smells opportunities to make runs, and I think he is the best option for England in possession," said Pleat. "If Newcastle can keep the ball, he'll be a force.

"He was patient at Tottenham, and he's very humble. He's not a shouter or a bawler, but he wins the respect of his team-mates with his ability."