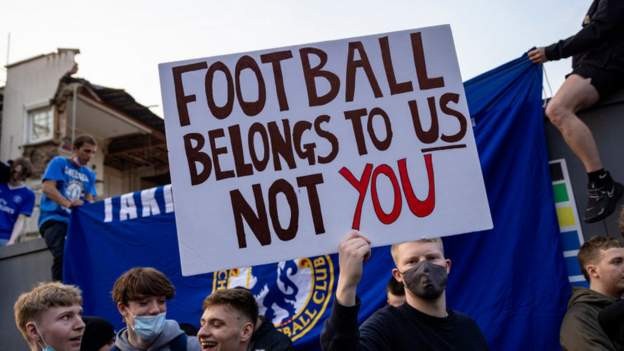 With the failure of the European Super League and the ongoing fan protests against club owners, relationships between some of the biggest Premier League clubs and their fans feel like they are at an all-time low.

So it is no surprise a new league table rating how football clubs engage with supporters places those 'big six' English teams firmly in the bottom half - with the message they are "failing fans to some extent".

The Fan Engagement Index,external-link which rates dialogue, governance and transparency, shows how the so-called Big Six compare to England's 91 other professional clubs.

Manchester City rated highest of the six at 46th, but that was still in the bottom half for the 2019-20 season.

The best-faring top flight teams from the 2019-20 season are Norwich (10th), Leicester (11th) and Everton (13th) with League Two Exeter City top of the table for the second year running.

European Super League: Legal challenges and broken trust - what happens next? Manchester United protests: Emotions have been simmering for 16 years

Exeter are one of eight League One and League Two clubs who make up the top 10 and are partly run by supporters' trusts or have fan representation on their boards. Reading are the highest-ranked Championship team in eighth.

Fan engagement consultant Kevin Rye, who compiled the index, said the results for the 'big six' showed they were "failing fans to some extent" but admitted "you did not need to look at the table for that" and "a lot of clubs aren't exactly covering themselves in glory".

All of the 'big six', except Tottenham, have apologised or showed regret for their part in the Super League. Chelsea announced on Tuesday that three supporter advisors will attend board meetings "to ensure general supporter sentiment is considered" while Liverpool have met one of its supporters' groups to discuss changes to its structure.

It all comes in advance of a government-led fan review, which will consider supporter involvement and ownership models.

"Clubs have become detached from fans and despite people saying this for a long time, clubs carry on as if there isn't a problem," Rye told BBC Sport.

"We have now seen a very sensible first step by Chelsea and there are models of dealing with this beyond saying that every club needs to have fan ownership. It's a culture and an attitude.

"Premier League clubs that do fan engagement well are Norwich, Everton and Leicester and the reasons for that is their leadership; the people at the top and who run departments all understand what the fan is and how it is different from a customer. They make sure that attitude goes across the whole club."

Exeter City have certain agreements only fans can have the final say onLessons to be learned from Exeter City?

Exeter, who are attempting to reach the League Two play-offs this weekend, have been a supporter-owned club for 20 years, having been left in £4.5m debt by previous owners.

Chairman of their supporters' trust and board member Nick Hawker says that the club is run "for the benefit of supporters and community" and "huge good will comes out of that".

He says the fact supporters donate £100,000 to the running of the club each year, and almost double that over the last year, is proof of what it means to them. He also explains how there is a club trust agreement which has a list of matters where fans have the final say, including Exeter City's name, its playing colours and whether to sell the club or move stadium.

With debt affecting many clubs, he says fan ownership can play a part in running clubs more responsibly and sustainably.

"Listening to what fans want could solve a lot of football's problems," he tells BBC Sport. "Who owns the club? Nobody really. Most clubs in the United Kingdom were born in the late 1800s or early 1900s often through churches or working men's clubs and they are so deeply-rooted in the community.

"We don't own Exeter City, it's in our safe-keeping. That's what some Premier League owners have to understand."

Rye added: "If fans were truly integrated into the 'big six' clubs would they have come to the same decision about the European Super League?

"It's not like buying or owning a shop, if you buy a football club and don't like the fact fans like to have a say and be integrated into the club, why are you owning a football club?

NB: Where total scores are equal, dialogue is given added weight