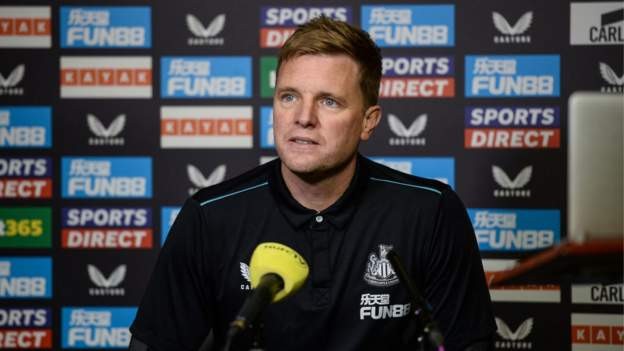 Howe joined Newcastle this month on a contract until 2024

Eddie Howe will be in the dugout for the first time as Newcastle manager as they visit Arsenal on Saturday.

The new Magpies boss, 43, returned a negative test for coronavirus on Friday, a week after being forced to miss his first game in charge.

There are no new cases at Newcastle, who are bottom of the Premier League with six points from 12 games.

Assistant manager Jason Tindall said: "From my own personal experiences when I had Covid a couple of months ago, I had no symptoms to start with and it was only after about eight or nine days where it hit me really hard and I began to struggle.

"But from how Eddie was, I'd say Sunday, Monday, Tuesday, in comparison to how he's now feeling and the tone of his voice [during] the latter part of this week, there's been a big difference."

Howe's symptoms were traced back to last week, from which the 10-day isolation period could commence.

The club has since followed all necessary protocols so Howe, who was appointed as Steve Bruce's successor this month, is able to sit in the dugout just eight days after his positive test.