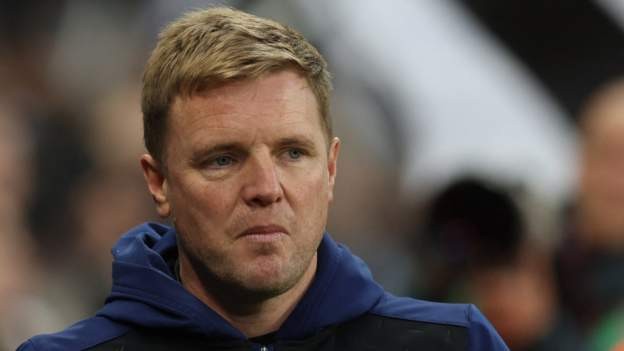 Newcastle United manager Eddie Howe says it will not be the "revolution that everyone thinks it will be" at the club in the summer.

A Saudi Arabian-backed takeover of the Magpies in October 2021 has made them one of the richest clubs in the world.

They spent £90m in the January transfer window and Howe will be looking at making further additions this summer.

"I am happy with this squad while acknowledging that time never stands still," said Howe.

"You have to continue to improve and evolve so I have no problem looking outward and saying we do need certain things.

"But I do not think it will be the revolution that everyone thinks it will be, and it can't be because we are under financial restrictions."

Howe was appointed Newcastle boss in November 2021 with the club 19th in the Premier League and five points from safety after 11 games.

With seven top-flight games left, they are in 15th spot and 10 points above the relegation zone.

"It is not just a case of signing anybody, and that would never be the way I work anyway because every individual has to fit within the structure of the team and make the team better, not just the individual," added Howe.

"That is fundamental to our future, so for all those different reasons, I do not think it will ever be a case of wholesale changes."