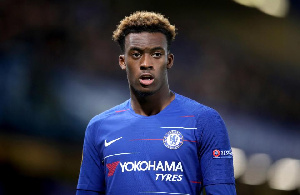 Former Hearts of Oak and Asante Kotoko star Charles Taylor has advised Chelsea star Callum Hudson-Odoi not to think of switching nationality to play for the Black Stars.

The 20-year old despite featuring for the three lions of England is still eligible to play for Ghana per the new FIFA rules.

Son of Ghanaian immigrants in the United Kingdom, the winger is among a host of UK-born players on the radar of the Black Stars, the other targets include Arsenal striker Eddie Nketiah and Brighton & Hove Albion fullback Tariq Lamptey.

Odoi, who is currently on holiday in Ghana after being snubbed by England for the upcoming European Championship, paid a courtesy call on Akufo-Addo recently after he opened the door for a possible international switch.

But Taylor has advised the enterprising winger not to think of nationality switch to salvage his career.